CLICK HERE TO SEE THE LIVE BLOG FOR TONIGHT'S GAME 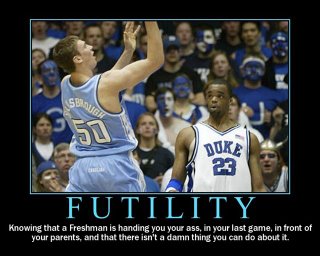 9:00 PM
Let me first say that this stunt by ESPN to use all of their outlets is ridiculous. Now that's out of the way. Digger Phelps and Jay Bilas both pick Duke. No suprise there, since everyone at ESPN have their heads shoved so far up Mike Krzyzewski's rear end it is disgusting.

9:04 PM
Oh good, Brad Nessler is doing play-by-play and not Mike Patrick. I was watching a Duke-UNC game from 1988 and it was interesting to listen to Patrick and Dick Vitale before they became Mike Krzyzewski's personal PR guys.

9:05 PM
Depending on how much Vitale annoys me I may put Woody Durham on the radio, even if they are 10 seconds faster.

9:06 PM
Tip off! A little controversy on the tip. Duke inbounds.

9:12 PM
Redick is trying to shoot from anywhere on the court. Misses a 25 foot jumper.

9:14 PM
1st TV timeout. UNC needs to weather and not fall too far behind. Good defensive stop on the turnover. Redick is hot, but it also should be noted that Shelden Williams is not touching the ball along with the rest of the Duke team. If Duke gets caught standing around watching Redick it could work in favor of UNC. Redick cannot beat UNC all by himself unless he scores 60 points or so.

9:20 PM
They finally call a foul on Duke. I think they have gotten away with some early.

9:23 PM
UNC scores to pull within four, game has settled and Redick has missed a few straight now.

9:24 PM
I am finding hard to believe that UNC players are losing the ball without any contact from Duke defenders.

9:25 PM
Duke is overplaying the ball and passing lanes. There are times when near double teams occur on the ball out on top. Frasor needs to find a way to move the ball. 2nd TV timeout.

Again, how can UNC players drop the ball without contact?

9:29 PM
Roy Williams has taken off his jacket. Why does ESPN go to that Sportcenter break and reduce the game view to a small screen?

Quick flurry: Missed layup from Redick, missed follow dunk from Williams. UNC back the other way, kickout to Reyshawn Terry who hits the big three.

9:36 PM
Come on! You cannot tell me UNC players are fumbling the ball that easily. And that is the third time Quintein Thomas has gone down so either he has butter on his shoes or the Duke defenders are making contact. 3rd TV timeout, UNC ball, Duke leads 22-19.

9:40 PM
Thomas basket gives UNC the lead at 23-22. Redick is pushing off and then they call the foul on UNC as he flings toward the basket.

9:42 PM
Noel has three fouls. UNC is subbing heavily and that could be crucial later.

Steal from Paulus and layup from Williams. Duke now up three.

Nice pass to Ginyard from midcourt for the dunk. UNC leads 29-28.

Duke now up 35-33. Pretty long stretch without Noel in the game because of the foul trouble.

Great coverage on Redick but he kicks out to Melchionni for three. Duke up 38-37.

HALFTIME ANALYSIS
It was probably a blessing in disguise that Redick went cold because it has jumpstarted the rest of the Duke team to hit some big shots. The key to beating Duke is not so much stopping Redick, it is stopping the rest of the team. Melchionni has been a killer and Williams has hit some shots. Both teams are shooting right at 40%. Fouls are pretty even with Noel having three. Williams has two. I think one key second half issue will be fatigue. UNC can subistute freely and not experience much of a dropoff. Duke does not have that kind of depth. It will be interesting to see whether Duke fatigue may result in more fouls as they are unable to defend as well on tired legs. I do not forsee Redick staying quiet. Earlier this year in Chapel Hill he was fairly quiet for a spell and then killed UNC with two threes which extended the lead to 8 under a minute to go. UNC needs to hit some big shots, especially any three pointers they may have open to them.

10:08 PM
There is no way I can articulate how little I care about what Digger Phelps has to say or how little credibility he has as an analyst. He was coaching those Notre Dame teams back in the 1980's UNC beat in the NCAA two years in a row. The last one, in 1986 I think involved ND guard David Rivers dribbling the ball off his foot in a tied game. Kenny Smith scooped it up and gave UNC the lead and the game on the layup.

10:14 PM
18 bench points for UNC underscores how crucial their depth and Duke fatigue could be later.

Easy dunk for Shelden Williams. Roy must be livid.

Hansbrough basket pulls it back to one.

Redick with a major brick, he is so cold.

10:17 PM
Williams knock Hansbrough down and there is no call!?!?

Three fouls on Williams. Free throw ties the game at 42.

I am sorry, but that is an offensive foul on Redick, they call the block instead.

I can only feel like UNC is blowing a chance to open this up a little. Not that it matters.

Hansbrough walks before starting his move.

McRoberts dunk ignites the crowd. Thomas silences them to tie it at 46.

Nelson on the layup puts Duke up 2. Terry miss. Wow, they have no qualms about calling those ticky tack had checks on UNC.

10:33 PM
Redick is on the bench. UNC not rebounding on the offensive glass.

Frasor for three...YES! UNC up four. UNC turns it over after a steal.

10:35 PM
Not a good shot by Noel. No offensive movement. No defense for that matter either as Nelson gets an easy bucket to tie the game.

Roy has the coat back on. Hansbrough puts UNC back up two off the inbounds.

Another great basket from Hansbrough, UNC now up 4.

Steal by Hansbrough on the feed to Williams. Duke a little tired perhaps?

10:39 PM
I think Duke is tired, great move by K to call the TO and then get the TV timeout on the next dead ball. That will give his guys a little rest.

10:41 PM
I harbor no delusions about where this game is going. Duke will rally and you always feel like that somehow Duke will still win.

10:46 PM
Heels miss a chance to go up 10. Redick is cold. Williams walks under the basket. UNC ball with another chance for a 10 point lead.

Noel for two...UNC up 10! Another Williams miss. UNC ball.

10:47 PM
Terry fouled while shooting. A little under 6 minutes left, UNC needs to work the clock a little but keep up the strong defense. Terry hits 1 of 2, Williams has four fouls.

10:49 PM
UNC missing opportunities to open this thing up more. Stupid foul on Noel against Redick. Redick's only hope for scoring seems to be the free throw line.

10:51 PM
UNC has failed to score twice down. Here is the problem. Duke is ice cold from the floor but UNC feels compelled to put them on the line where they have had no problem hitting shots.

Duke gets a timeout from a loose ball. Under 4 minutes to go.

Is Duke looking to return the favor from last season's UNC rally on their senior day?

10:54 PM
Williams hits the basket and is fouled. Last TV timeout. Williams will be on the line with a chance to cut it to seven.

It is important that UNC not go cold now. I have a deep dread that that is about to happen and Redick is going to find the range to cut it to four. or five.

10:57 PM
A three from Hansbrough at the shot clock buzzer! Who said he did not have range!

10:59 PM
If I hear one more time that Redick is emotionally drained from chasing records and other stuff I am going to scream. Could it be that people are defending him better?

Williams slam cuts it 10. Timeout Duke, they have one left.

Redick was 4 for 5 to start the game, since then he is 1-14 and has missed some shots horribly.

Nelson for three cuts it to eight.

It is imperative for UNC to score here.

UNC is trying to give it away!

11:06 PM
UNC forces the turnover. Duke unsure of whether to foul or not. Frasor fouled and going to the line to make it a two possession game with 23 seconds left.

Frasor hits one! Two posssession game. This one makes it 5.

11:08 PM
Coach K is screaming at someone. Teddy Valentine the referee is backing him up to the bench and telling him to get back. The ref will not decide a game with a technical foul so no way he gets one here.

Heels run off seven seconds, but Hansbrough is going to the line.

Hits both shots and UNC is up 5.

Duke misses the three. UNC rebounds and is fouled.

REDICK IS ABOUT TO CRY! 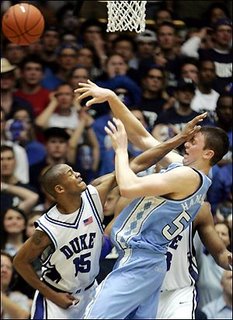 UNC HAS SHOCKED DUKE AT CAMERON. I REALLY WISH I HAD ESPNU SO I COULD SEE THE LONG FACES IN THE CAMERON CROWD.

Post Game Analysis
I am really shocked. As much as I have enjoyed watching the Heels go from middle of the pack ACC team to almost top ten team, I am still reserved believing they could win. I also have endured watching Duke pull out games I still was not convinced they could win.

Side Note: I am watching the 1995 Duke-UNC game on ESPN Classic and UNC has a starting five of Jeff McInnis, Danta Calabria, Donald Williams, Jerry Stackhouse, and Rasheed Wallace. Tell me how they did not win a national title. Anyway.

Some of the more striking features of the game were:

Side Note: I just saw the Stackhouse dunk where he was fouled by Cherokee Parks and dunk it on the reverse side. Of course the fact they let Duke back in this game is the reason why they did not win a title. Moving on.

Redick's futility has been an issue now for three games. I said after the Georgia Tech game that if Duke played a team that could hold it together for 40 minutes, Duke would be in trouble. In the past games Williams had been enough to make up the lack of production from Redick. Paulaus, Dockey, Nelson, and Melchionni have been able to cobble together big games. Tonight, Williams played well but was matched by Hansbrough. UNC got big contributions from Frasor, Green, and Ginyard. Noel and Terry were well defended and Noel had foul trouble.

This was a huge win which I think solidifies a #3 seed in the NCAA Tournament. UNC moves to 12-4 and sole possession of second place. The job Roy has now is to keep these guys in the right frame of mind going into the ACC and NCAA Tournaments. UNC proved tonight that they are fully capable of sweeping three next week in Greensboro. Duke has a lot reflection to undertake and regroup before they face their round one opponent.

Another memorable win and another UNC-Duke classic.