What is a Slam Dunk?

Share All sharing options for: What is a Slam Dunk?

Because I thought this was readily defined but following the Tennessee-Army game in the Women's NCAA Tournament the standard has been adjusted somewhat. Volunteer Candace Parker is being hailed as the first woman to "dunk" twice in a tournament game. This is obviously big news for women's basketball fans who want to see the game moved above the rim a little more to ratchet up better support. ESPN, by and far the largest advocate of women's basketball, has been effusive about this feat. Now, let me be clear, I am not a sexist. I like women's basketball, I do not find it to be nearly as compelling as the men's game. I like watching the current UNC women's team because they play a very fast style much like that found in the men's game. Having placed that disclaimer squarely out there I can honestly tell you that what Candace Parker did yesterday, from what I saw, was not a slam dunk, it was a layup on which she grabbed the rim. The Merriam-Webster dictionary defines a "dunk shot" as:

Now look at this photo of one of Parker's "dunks" 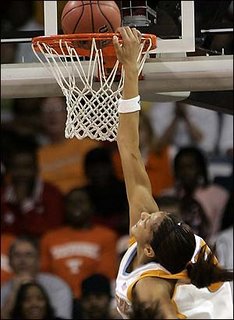 Now, I have seen footage of Parker dunking in the McDonald's High School All American slam dunk contest, so I am not saying she cannot dunk. However, this is not a slam dunk, not by the definition in the dictionary and not in comparison to what consitutes a slam dunk in the men's game. And to anyone who thinks it is not an important distinction or thinks that it does not have to be the same as in the men's game should probably ask yourself why everyone is pushing this dunk as a boon for women's basketball. It is because women's basketball needs to become more like the men's game in order to get people into the stands. I am just not sure labeling something that is clearly not a slam dunk as a dunk in an effort to raise interest in the game is the way to go. Of course ESPN, in particular, has never been interested in the difference between apples and oranges, just ask Dean Smith about his all time wins record.