North Carolina has scheduled a 3 PM press conference today to formally introduce Butch Davis as head football coach for the Tar Heels. Of course this all comes with the backdrop of NC State starting the same process UNC undertook in late October. The Davis hire, if anything, raises the ante for NC State in their search for a new coach. Settling for alums or even assistants at more prominent programs may not cut it anymore. As for Davis, the debate that most often comes to the surface is how long he intends to stay at UNC and whether or not UNC can hold onto him with offers for other jobs floating around. At present that debate has been put aside because the coming of Butch Davis stirs up excitement in and around the program. UNC football has a credible winner and recognizable name as it's head coach. The program now moves forward with renewed expectations as well as the idea that they can be a player in ACC or even the national scene. No one knows what will happen down the road but right now UNC football has the coach it needs to be a difference maker again.

And despite my own objections to the hire, it is difficult not to get excited about seeing this: 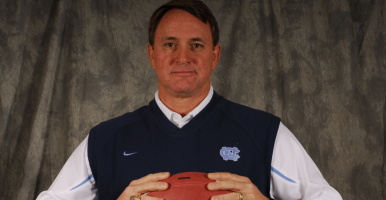