Share All sharing options for: Media Roundup on UNC-St. Aug's

And there is plenty to see in the fourth and deepest version of Roy Williams' Tar Heels.

There are brand new post players, speedy new guards, a new-but-old fullcourt press and the same old Tyler Hansbrough. The whole menagerie was on display in the Tar Heels' 110-79 win over St. Aug's.

UNC used a 13-player rotation, rolling one after another off the bench, with Williams often shuttling in five subs at a time, unit by unit overwhelming the Division II Falcons. 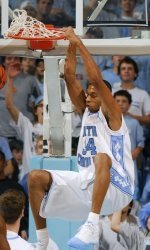 "Brandan does some outstanding things," says Williams. "The best thing about him is he has been a really quick learner. Out of everything we try to do, of the freshmen, he's probably picked up things quicker than anybody we have."

This year's team still has Hansbrough and is working on chemistry. But as they showed during Wednesday's romp over St. Augustine's, they also have some of those oohs and ahhs.

This team has Marcus Ginyard tossing an alley-oop pass to Brandan Wright that looks way too high and way too behind its target to ever be productive. Then Wright soars through the air, cupps the ball with his left hand, and slams it through all in one motion. That's Rasheed Wallace at Cameron Indoor Stadium. That's an ooh.

I have said since the summer, we are going to try and play at a faster pace. We have to try and speed the game up and get more possessions. We had 53 possessions in the first half, and I said we wanted to averaged 100, and that’s hard to do.