Were I a Lesser Man, This Title Would Request a Call for, in the Parlance, a "Wahmbulance"

Share All sharing options for: Were I a Lesser Man, This Title Would Request a Call for, in the Parlance, a "Wahmbulance"

Every year the Associated Press delivers three or four articles that exist solely to remind me that Duke students deserve any and all scorn heaped upon them. Today's missive teels the story of how the overprivledged and unintelligent have banned Robertson scholars from camping out for basketball tickets. Robertson scholars take courses at both North Carolina and Duke (and apparently travel the world) and a couple of students showed up at Cameron in - horrors of horrors - UNC T-shirts. Witness the trauma the poor Jerseyites had thrust upon them last spring:

"It was the worst basketball game of my life," said senior Jimmy Soni, DSG vice president for academic affairs.

He added that the Robertson Scholars broke "a gentleman's agreement."

"For that, they will be punished," Soni said.

Jimmy, we need to talk. Join me after the break.

Look Jimbo, here's a little life lesson. With the exception of the occasional particularly repugnant country club, you will have to share space with people who hold opinions other than yours. The proper thing to do when opposing fans find their way into your stadium is, well, this: 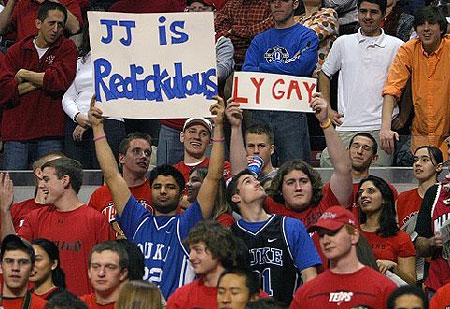 Now isn't that a much healthier way to deal with people wearing a different colored shirt?