Anatomy of an Obsession

Share All sharing options for: Anatomy of an Obsession

The Durham Herald-Sun ran an article today on UNC's strength of schedule. It's not particularly exciting. They had the toughest schedule in 2004, and numbers 5, 11, 5, and 16 the other four years of Bunting's tenure. Rutgers and South Florida are strong Big East teams, and gee, Notre Dame pretty highly ranked, aren't they? Bunting and the players interviewed say, "Yes, these are tough teams." Nothing particularly shocking.

And then this is printed:

"Our out-of-conference schedule may be not as strong as it was in the past, but if you look at other teams in the ACC, other North Carolina teams -- I won't mention any names -- those guys played Citadel and school of the blind," UNC senior wide receiver Jesse Holley said. "They get three or four wins, and the next thing you know they're in a bowl game somewhere because they played two handicapped schools.

"We've got Notre Dame. Furman, what were they, in the NCAA I-AA championship? And they've won here before. And South Florida is not a slouch, either. They beat the brakes off of Louisville, and Louisville beat us by 50. So there's still some good teams that we're playing."

And then the Wolfpack blogs go nuts. They're seriously arguing over the internet about a joke involving a school of the blind.

Wolfpack? This is why your not a serious rival. Suck it up, schedule whoever you'd like and help your team win the damn game. UNC fans have been making these jokes for years. (We also enjoy making agricultural insults and claiming intellectual superiority, if you're interested.) If you'd rather act the martyr on a blog, well, here you go: 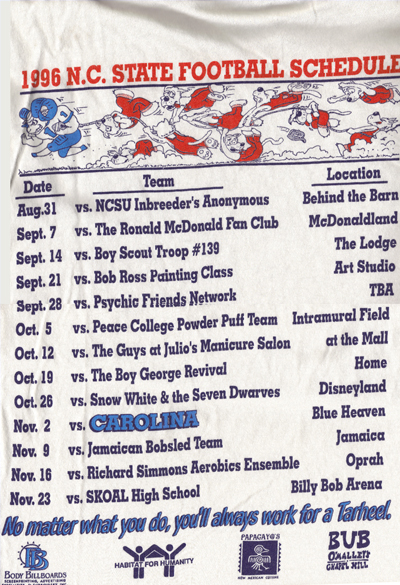 It's one of those frat sell-for-charity shirts from 10 years back. It's not even particularly funny, but it's enough fodder to keep you well and truly affronted for sometime. Have at it; I'll be enjoying the football season.

(I'm not sure any of the sponsors on that shirt are still in business, come to think of it. The shirt designer also misspelled Tar Heel - possibly why the screenprinter no longer exists. And on second thought, that Bob Ross Painting Class team could be an entertaining team to watch. Do you think they need helmets, or is the hairstyle strong enough to resist impact?)