What the heck is wrong with UVa? On Wednesday night the Cavs made Gonzaga look like a lower tier conference team or in other words they looked like the Gonzaga of old. So what happens Sunday? UVa drops one to a Stanford team that is closer to being the Gonzaga of old than the Stanford of the same era. UVa lost this one when Stanford hit a jumper with 0.9 on the clock which left the Cavs with very little time to get much of a shot off. Statistically speaking the only thing that jumps out at me is J.R. Reynolds and Sean Singletary go to the FT line...very frequently. 18 of UVa's 31 attempts from the stripe came from the two starting guards. I also noticed Singletary shot a tad on the streaky side at 6-14 and Reynolds only got seven shots off total. Adrian Joseph was the only other Cavalier in double figures and six of his 12 points came from the perimeter. What does this all mean? It means if you can limit what UVA does on the outside you will beat them.

The Heels lead off the pursuit of an ACC Regular Season title by wearing the Noles out and eventually dominating them with a 26 point win on their way to the #1 national ranking.

Here are the standings as of Monday morning: 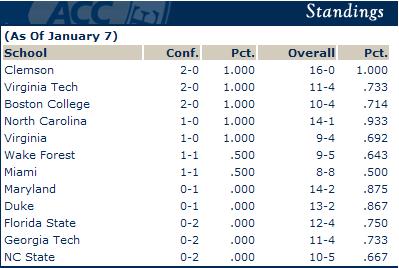 Biggest suprirses so far? Clemson and Virginia Tech at 2-0 with both teams winning tough road games at FSU and Duke respectively. Also, Georgia Tech and FSU at 0-2 which in the case of GT is really disappointing considering one of those losses was to Miami. Everyone else is pretty much where we thought they would be 1-2 games into the conference season. Wake Forest and Miami both will run the gauntlet over the next five weeks and settled down the standings. I expect NC State to snag a few wins here and there. In my opinion Duke, Boston College, and Maryland are the three to watch over the next few weeks to see if they can consistently win and position themselves in the upper part of the conference. Likewise VT and Virginia will face tough games in the coming weeks which could make or break any NCAA Tournament aspirations. Clemson is sitting pretty at present. I thought if they could get three wins in the first five games they would be in great shape going forward. Having nailed down two with a trip to NC State on the horizon, Clemson has to like their chances for a winning conference record and NCAA Tournament bid.

The caveat is, it is still very early and this version of the ACC should reflect the same parity happening in the rest of the nation. Unpredictable probably does not begin to describe how the next few weeks could go.