This is how Duke Radio Network's Bob Harris described the actions of Florida State players who in response to winning at Duke for the first time ever faced the crowd and began "popping" their jerseys. Apparently this act was so egregious that Harris said it was "dangerous." The only thing I am trying to figure out is why would Seminole players showing up the crowd be considered dangerous? Was there a risk Cameron Crazies would storm the court and attack the FSU players? Maybe Harris was truly concerned that Kzryzewski would destroy FSU in some way.

At any rate it highlights a significant disconnect among Duke partisans about the repuation of the Cameron Crazies and the pleasure opposing teams take in sticking it to them when they come in and win at one of the tougher venues in the country. This is what happens when you are wildly successful and have fans who routinely abuse the opposition then all of those teams you have victimized finally get a chance to turn the tables. If you can dish it out then you most certainly must be ready to take it when it comes back to you. So among the choice of words Harris could have used there dangerous is not what I would have used to describe it.

In fact I happen to think having your dinky little point guard try to go toe-to-toe with an opposing player who is so obviously capable of ripping him to shreds were it not for his coach restraining him is really dangerous. 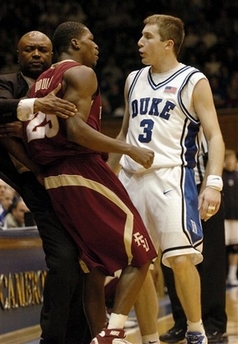 Less than 48 hours to College Basketball Armageddon 2007, Part I...