The Best Elite Eight Ever?

Share All sharing options for: The Best Elite Eight Ever?

At least it is according to the seedings and that is really ironic considering we were all told that this was a new age of parity in college basketball. This Elite Eight will feature the lowest combined total of seedings ever at 13 which averages out to 1.625. Here are the seedings for the Elite Eight since the field expanded to 64 teams in 1985: 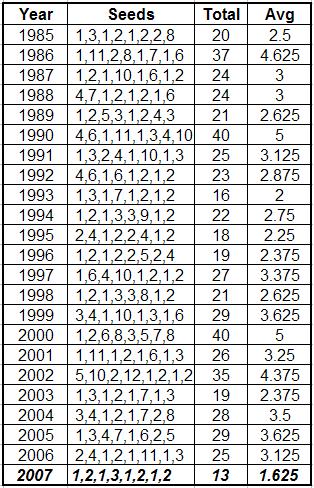 Looking back at the history of the expanded tournament the closest we have ever come to this is 1993 when you also ended up with the lowest combined seeding total in the Final Four with three ones and a two. The 1993 Elite Eight had four #1s, two #2s, one #3, and one #7. The worst Elite Eight ever according to seeding? Twice in 1990 and 2000 which is interesting because in 1980 when the field was at 48 teams, the combined seeding total for the Elite Eight was 35. In other words the start of every decade produces some wild NCAA Tournaments.

I do think there is actually less of a chance all the #1 seeds will get to Atlanta because they are playing three #2s and a #3. At any rate you have eight teams at the highest level playing each other. It should be great.