With the release of the media's predictions for the ACC football season, a reader here at THF wondered how this same media did last season in predicting the ACC finish. After all these are the predictions the same writers use as the measuring stick to decide which teams are living up to par and create fodder for their own columns. So let's put them under the microscope shall we and see if the predictions we have just been given are worth a grain of salt based on last season.

And now the actual results: 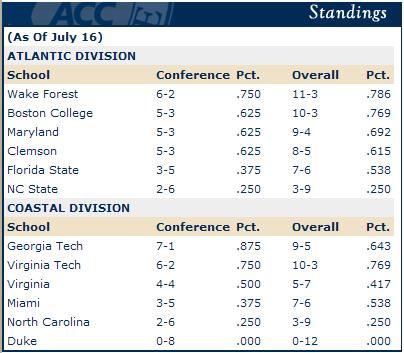 Out of the 12 teams in the league the media has exactly three teams in the correct slot by the end of the season and that was Virgina Tech, North Carolina, and Duke. Duke was really a no brainer so I am not real sure they get credit for that one. The rest of the teams that had wrong. In some case it was a minor mistake. NC State ended up in sixth instead of fifth. Boston College was second instead of third, Maryland was third instead of fourth and Virginia was also third instead of fourth. After that the train completely came off the tracks, partly because the ACC Media was still in love with all things Florida, which is not really that shocking. Miami and FSU were the picks to win their divisions and ended up fourth and fifth respectively. Clemson was picked second in the Atlantic and ended up fourth. Georgia Tech was picked third in the Coastal but ended up winning the division and losing to the biggest surprise of all, picked for last Wake Forest who won the Atlantic and the title game in Jacksonville.

Now on one side I know this is essentially a crapshoot. I made my own predictions and as it turns out I was off worse than the writers were. Then again I am a blogger doing this as a side hobby because I love UNC and the ACC. If I blow my picks you can chalk it to the fact that I do not have significant time to devote to reading enough information about the teams to make as educated a pick as I could make. I would think these guys, who are getting paid to do this, should be a little closer to the mark than they were last season. Secondary to that is the fact the media predictions are the beginning of a somewhat hypocritical cycle where the writers set a bar and when teams do not meet that bar they write columns and articles telling us everything wrong with the teams they wrongly picked in the first place! How can you, with a straight face, write 1000 words on why FSU is underachieving when they are underachieving based on your own mistaken predictions. If every critical column could begin with a "We, the members of the media, were grossly mistaken about this team and it's performance in the upcoming season and now would like to point out all the things we missed in picking them to win the ACC" disclaimer I would actually feel better about it.

So, the predictions are out there. Take them with a grain of salt and possibly an asprin when the writers begin using their own worthless predictions as fuel to spit out a few columns.