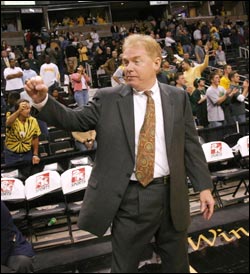 I have written often on THF about my father and his passing on the night of the 2005 National Semifinal. Daddy was 54 when he was suddenly taken in an accident. Losing a loved one is hard under any circumstances but I know of no case that it is harder than a loved one lost without warning and well before their time during a period of their life when they have so much to offer. It is shock from which you never can fully recover as you are set upon a turbulent ocean of unrelenting sadness and nagging questions. This is the journey Skip Prosser's family, friends, players and co-workers embark on this evening and with each passing day beyond this one.

As for the Wake Forest community, the Demon Deacon fans, and those of us who were weaned on ACC basketball we feel the loss of Skip Prosser the coach. Prosser was the very essence of what was great about college basketball. He was a passionate and true teacher of the game as well as a tireless competitor. The last game I saw him coach was the ACC 1st Round win over Georgia Tech which ranked as one of the best games of the season. Prosser coached his heart out that night as the Deacs completed a sweep of the lower seeds of the upper seeds on the first day. It was hopefully the beginning of a turnaround from a two year downturn in Winston-Salem. Just recently Wake Forest had secured some highly touted recruits and there was every indication they were on their way back to the top tier of the ACC.

As a UNC fan I was truly excited. The rise of NC State under Sidney Lowe, the continued excellence at Duke and UNC plus the return of Wake Forest from two down seasons meant the Big Four would once again become the core of the ACC in basketball. The incredible representation all four ACC schools enjoyed with Roy, K, Lowe and Skip at their respective helms was as good, if not better, than any state in the country which only serves to make the ACC one of the best conferences in the nation. And while Wake Forest may still continue that upward climb it will be without the leadership of a man who did not shy away from the challenge of leaving Xavier to come to Wake Forest. Prosser embraced the tough job of running an ACC program with Duke, UNC and NC State down the road. Prosser took on the task and succeeded with Wake Forest winning a regular season title and at one point being ranked #1 in the nation.

So farewell Coach Prosser. Like many other ACC fans, I am saddened my team did not have the opportunity to match wits with yours on the court once more and that you are no longer among the ranks of ACC coaches. As a conference we are certainly diminished now but I pray you are at peace with God.

Let me extend my heartfelt condolences to the Prosser family, the Wake Forest community and Demon Deacon Nation at large.

In memory of Skip Prosser, this blog will now stand silent for one day.