Share All sharing options for: Tar Heel Tip-Off: A Review 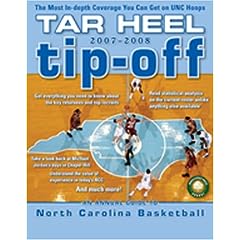 When I got an e-mail a couple of weeks ago from a publisher offerring to send me a review copy of Tar Heel Tip-Off, I almost turned it down. Which is odd, because I'm generally fond of free things - luxury car dealers take note. I'm not a fan of basketball yearbooks, however. They're typically printed months in advance, out-of-date by the time they hit the stands, and generally filled with baseless speculation and retreads of the previous year. And dammit, that's what blogs are for.

My desire for free things won out though, and I got a copy just in time to take it on a cross-country flight this weekend. And it wasn't at all what I expected.

Tar Heel Tipoff was put together by Adrian Atkinson with the help of a host of contributors, drawn primarily from the Inside Carolina community and around the web. And as such, it's a product of the internet's statistical perspective - and any annual that starts off by thanking Charlie Board and Ken Pomeroy is off to a good start.

The magazine has enough raw data to make a stat geek drool, with tempo-free stats for the Heels, divided by month, opponent rank, ACC vs. non-conference, regular vs. postseason, home vs. away, and wins vs. losses as well as individual stats subdivided similarly and broken down by offense, defense, team performance per player and tandem, by position and shooting location on the court. Toss in quite a few tables interspersed to illustrate various arguments Atkinson puts forth (Interested in the stats on every point guard since 1981-82 with over 10 ppg, 2.5 assists to turnovers and a true shooting percentage over 57%? This is the book for you.) and there's more than enough data to keep me returning to this book as the season goes on.

How about the writing though? Atkinson brings in some ringers, tapping David Glenn to write an ACC preview, the folks at Carolina Water Cooler to analyze the numerous things that could go wrong this year, Thad Williamson to discuss Dean Smith's shadow over the program, and reprinting an Inside Carolina profile of Bill Bunting.

Atkinson's own writing is as stat-heavy and mathematically-inclined as you'd expect from an enviromental economist, and his two articles both focus on the statistical improvement of players from year to year. The first speculates on the improvemtn we can look forward to in this year's team, projecting player stats based on similar performances in the last 25 years among Carolina and ACC players. It's the weaker of the two, as I don't fully buy a lot of his comparisons, but it's still filled with a lot of good analysis, especially with regards to the effect various players had on the floor last season. The second article is more up my alley, with a fascinating look in aggregate at how high school players improve statistically over four years of college ball. Both articles are heavy on endnotes - I'd personally find footnotes easier to read in magazine articles - but on the whole quite engaging, especially considering the amonunt of numbers thrown at the reader.

A couple of the other authors are equally fond of numbers, and work it into their articles well. Chris Turner does a great job breaking down Roy Williams' coaching philosophy by the numbers, and makes a strong case that Williams is much better at preparing players for the pros than the fellow down the road in Durham. Mark Carson's anniversary look at Phil Ford's career also has more hard data than you're used to seeing in such pieces.

There's all a look at Carolina basketball in the forties, a review of UNC recruiting that admirably focuses less on the future players - who will to a large extent be engimas before they hit the court in 2008 no matter how many creepy middle-aged guys in warm-ups haunt high school gyms - and more on when they made their decisions and the effect of them on Williams' psyche, and an article on the mental self-bias in a fan's thinking that was a bit too pop-science for me, but still generally entertaining.

So is it worth your $14.95? Tar Heel Tip-Off is a statistical tour de force, interspersed with articles that run the gamant from quick reads to a couple of truly engrossing bits of analysis. If that's your thing (and it's mine) I can highly recommend it. If it's not, it's still worth a flip through in the store to see if it pulls you in. And if you're a journalist, please pick this up. The sports world could use more writing from this sort of perspective.