Share All sharing options for: Dick Vitale Drops All Pretenses

Via Mr Irrelevant is this photo of the extended Vitale family in attendance at the Duke-Maryland game last night. 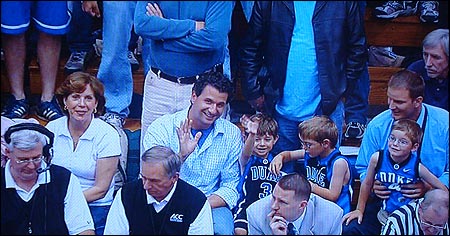 Now, on one hand, Vitale probably did not tell his sons to come to the game with his grandchildren decked out in Duke gear. Perhaps his sons are Duke fans and this is no different than any other family. On the other hand, it makes Vitale look like even more of a Duke homer than he already does(if that is possible.)

Update: According to commenter C.Michael his family dons the home colors if they are with him. So perhaps he is being less Duke homerish(is that a word?) than we might all think. And I would argue for journalistic integrity but please, we all know Vitale is no journalist in the same way Kirk Herbstreit is not one either.

Now, Mike Patrick on the other hand....