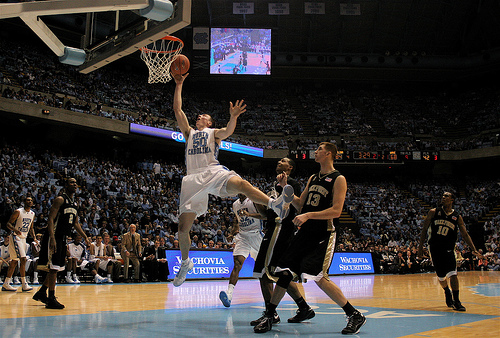 Just in case any of you went insane and thought UNC was not missing Ty Lawson, I give you this game tonight which was a sloppy effort from the Heels rife with turnovers. And yet, UNC still wins the game by 16 and were never threatened at any point in the second half against a Wake Forest team that came in playing extremely well. The defense had some issues on the perimeter allowing Wake to shoot at will from three in the first half. The second half was much better in this regard but you have to be impressed with what Jeff Teague and Ish Smith bring to the court. These two in combo with the rest of this young team will be a bear come next season.

As for the present season, UNC shot the ball extremely well and got the standard Tyler Hansbrough game with 29 points but only five rebounds which probably should garner an investigation of some sort. Wayne Ellington had a better game than the box score indicates simply because he hit big shots when needed such as a three at the buzzer to effectively kill any momentum Wake had after cutting the lead to six. Danny Green reemerged in that jack of all trades role and went for 15 and nine. Quetin Thomas was solid despite three turnovers and Alex Stepheson also put in some productive minutes. And Will Graves made the most of his six minutes hitting two threes.

Two players who did not have the best time out there on Sunday were Deon Thompson and Marcus Ginyard. Thompson looked a little tentative in getting back into action playing only 14 minutes. Ginyard on the other hand just looked bad with seven assists and six turnovers. His play had been so much better coming into this game, especially on offense. More or less this was just a bad game for Ginyard and he should bounce back when the Heels take the court again in six days.

So another win which puts UNC ahead in the win column. More importantly it was another win sans Lawson and the even money is that this will be the last one without him. UNC has weathered an incredibly different period on the strength of multiple players finding their roles and compensating for the loss of the starting PG. Now the Heels get another week off which came at a great spot looking at two road games down the stretch. Time now to get healthy and win the regular season.