Steve Lavin is a big believer in that whole "the Cameron Crazies are the best basketball fans in the world" narrative.

Last night on College Game Night, the upcoming UNC-Duke game was discussed with Jimmy Dykes and Steve Lavin breaking down the keys of the game. Dykes readily declared that UNC would win the game to which Lavin was absolutely incredulous saying:

Apparently Lavin thinks it is nearly impossible to win in Durham and is also wholly unfamiliar with the nature of this game. He is also ignorant of two other important points.

1. Tyler Hansbrough, Danny Green, Marcus Ginyard, Mike Copeland and Bobby Frasor are 2-0 at Cameron. Besides that allow me to offer this reminder of the last time Tyler and Co. came to Durham for Senior Night. 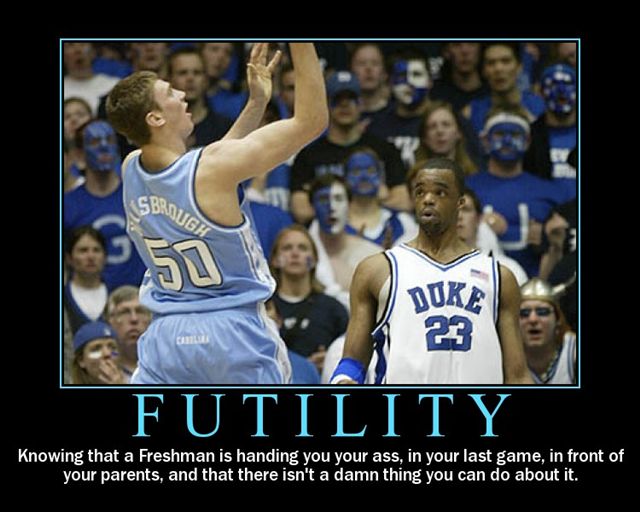 2. UNC is undefeated on the road this season. In fact, a UNC win on Saturday would mark the first time(as far as I know) since 1957 a UNC team has finished a season undefeated on the road. These Tar Heels are battle tested on the road and have played in some tough venues this season and met every challenge. I also think when you are discussing this group of UNC players, it appears to me that playing in front of a hostile crowd just does not bother them and I am almost to the point where I think they have played better in some stretches on the road than they do at home.

And none of this takes into account the fact that Cameron and the Crazies have really jumped the shark in my opinion. When they first hit it big in the mid 1980s, they were witty and brought Duke a legitimate edge at home. However there came a point where the Crazies started reading their own press. They went from being original and entertaining to being somewhat ho-hum. I also think teams that play there every year like UNC and Maryland simply adjust to the crowd because their coaches have won there enough to keep their teams properly focused. I mean there is only so many times you can go in there and listen to the crowd go "OOOOOOHHHHHHHHHH" for two minutes before it simply stops annoying you.

In short, to answer Lavin's awe of Cameron, there are many things that will happen during the course of this game UNC should be genuinely concerned about. The crowd is not one of them.