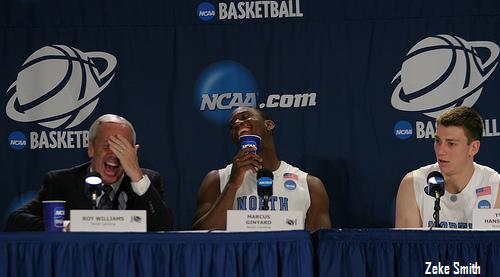 During the entirety of this season I have either read or listened to the postgame comments from Roy Williams and this might mark the first time I have heard him say something like this:

"We were pretty doggone good"

I am not sure how it looked on TV but sitting in the RBC Center I would agree.  This team look incredible at almost every facet of the game especially in the first half.  The numbers alone tell the story with 67% shooting and 8-16 from three point to go along with 28 assists against seven turnovers.  That is a 4 to 1 A/TO ratio which is pretty much on another planet.

The really big deal in this game was the play UNC got from Quentin Thomas, Alex Stepheson and Deon Thompson especially the duo at the four spot.  Any coach approaching UNC knows they have contend with Tyler Hansbrough on the interior, Wayne Ellington on the perimeter and Ty Lawson at the point.  They also know Danny Green will come off the bench and makes some good offensive plays.  But what happens if the core trio of Hansbrough, Ellington and Lawson come out firing on all cylinders and you get huge games from Thompson and Stepheson at the four along with Thomas playing the PG position extremely well while Lawson is resting on the bench?  What happens is UNC blows your team off the face of the earth in bone crushing fashion.  When you are talking about the expected scorers producing at a high level and put these other players beside them doing the same thing you are talking about a team with five or six viable offensive options which makes them difficult guard.

And speaking of guarding people, UNC did a little bit of that in this game.  The Heels played some flat out lock down defense in the first half much along the same lines of what they did in the first NC State game.  The Heels were blocking shots in the interior and this is against an Arkansas team with some decent inside presence.  There were multiple instances of UNC forcing Arkansas late into the shot clock and the intensity was where it needed to be.  There was a small letdown in the second half for the first few minutes but then all of a sudden they kicked the gear back in and got huge run up to extend the lead to the 35 point range.

To conclude the weekend, UNC completely dismantled two teams in incredibliy precise fashion, especially when it came to Arkansas. This game was over at 9-0 when John Pelphrey burned his first timeout in hopes of stopping the bleeding.  He would end up burning all of them before the game was out and it did not do the Razorbacks a lick of good.  UNC was just "too doggone good" to quote Ol' Roy.

And when it comes to playing in the NCAA Tournament I know that come 7:27 PM on Thursday versus Washington State what happened in this game and the one before will not mean a darn thing.  Momentum is extremely fleeting and apt to be with you one weekend only to desert you the next.   You also factor in the fact that according to seed Washington State is twice as good as Arkansas was, which means the next game will require an even higher level of play.  From what I have seen so far and heard in postgame comments these players understand how well they are playing and they also understand the need to keep pushing the envelope.  Nothing can be take for granted at this point but if these Tar Heels continue to play with the focus and intensity they have shown this weeked the rest of the field should take notice and get ready.