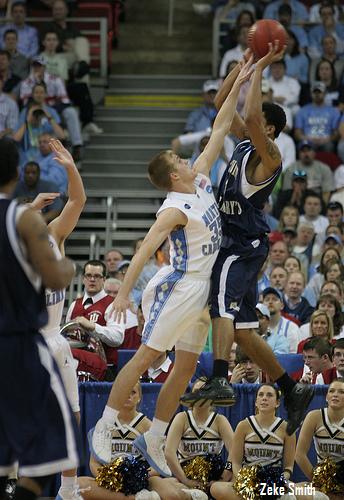 When Patrick Moody gets this kind of run, you know it was ugly.

I did miss the margin of victory on this.  I thought it would be a 41 point win, Heels only won by 39.

Coming into this game the concern was if Ty Lawson could return to form and if Deon Thompson could simply play better.  Both of those happened tonight, in fact everyone played a top flight game with the exception of Danny Green and Marcus Ginyard.  Well in Ginyard's case he just missed anything close, including a wide open dunk.  Green just seemed out of sync which I hope is not a pattern for him going forward.

In the end you have five Heels in double figures with Thompson and Alex Stepheson having huge games down low.  Tyler Hansbrough led the game off with a steal and dunk which was another example of his incredible effort considering that he was standing back in the paint, anticipated the pass and sprinted wide open into the passing lane for the steal.  From there the Heels were in control even though the defense seemed lax and MSM enjoyed some good looks on the way to 41 points and close to 50% shooting.  At halftime I am thinking Roy emphasized the defense since the offense was working in ways we have not seen since the first BC game.   In the second half the defense was much better at contesting shots and creating TOs.   There was about a seven minute stretch in the 2nd half where MSM did not score.  During that stretch UNC forced five turnovers and MSM missed a number of shots as UNC pushed it out to a 40 point lead.  Obviously you would rather see a full game defensive effort but clamping down the way the Heels did works too, just as long as you do not get into a huge hole with a lack of offense.

I do not know what the correlation, if any, there is between a #1 team decimating a #16 seed or struggling with them a bit as it pertains to what happens later in the tournament.  Obviously the huge win is preferable and I know that after UNC had issues with Eastern Kentucky last season I wondered how viable UNC was for a national title.  Of course in 1993 UNC only won by 20 over ECU and in 2005 the result was similar to what we saw tonight.  At this point I think it was an important step to come out show zero mercy to this team, especially in light of Duke and Tennessee allowing #15 seeds to hang around.  It also sent a powerful message as to what this team can do when their A game is working.

That being said, in tournament play you are only as viable as what you do in your next game and right now the Heels should be wholly focused on the next game.