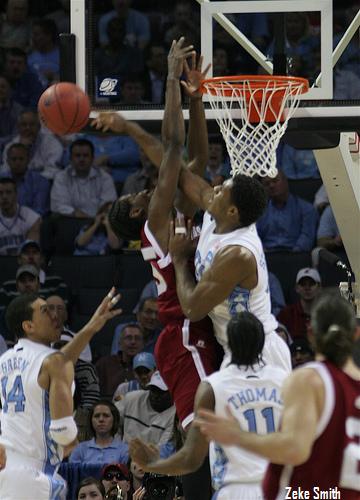 So we heard all week about how great the WSU defense was and for the most part it was one of the better defenses UNC faced all season.  The Heels offense was definitely frustrated early and generally bothered all game to the point the shots did not fall as consistently as they had been four days ago.  WSU did a pretty good job on Tyler Hansbrough during the first half holding him to only two points.  The huge problem any team has with playing UNC is the number of weapons that must be handled on any given possession.  In this game with Hansbrough handcuffed a bit in the first half it was Danny Green doing what he does so well in situations where the Heels need someone to step up and drill a three.  Green scored 12 of the 35 first half points and was a huge difference.  Wayne Ellington, while only scoring 13 on 4-13 shooting, put all sorts of pressure on the WSU defense.  Ty Lawson looks 100% to me, Alex Stepheson played productive minutes and Deon Thompson had eight more rebounds than Wanda taking to heart Roy's chiding after the Arkansas game.  Quentin Thomas is steady, steady, steady running the point as the backup.

The real irony of this game considering all of the focus on the WSU defense is the much maligned UNC offense got the job done.  With the score 15-14 UNC forced five Courgar turnovers en route to reeling off a 20-6 run to assume a 14 point lead at halftime which was pretty close to being the ballgame considering the pace WSU uses on offense.  Among the star performers on defense Stepheson had two blocked shots on consecutive plays, Ellington and Lawson did a good job on the WSU guards as did Marcus Ginyard.  It was a complete team effort on defense in holding WSU to 31% from the floor and 47 points total.  Roy always seems to point out that WSU missed shots they normally hit but he rightfully pointed out in his postgame remarks that UNC did too.  Ultimately missing some shots is part of the game but many of the misses from WSU resulted from UNC turning up the defensive pressure .

Looking at these three games UNC's margin of victory is around 30 ppg.  I do not recall a point in UNC's NCAA Tournament history in which they dominated the compeition this much.  I have seen them play well the first weekend and get into tussles during the 2nd weekend,  but nothing where they won three straight tournament games by 20+ points.  Of course I would be foolish to suggest this will continue at this level when Tennessee or Louisville is the opponent.  However I do think this team has locked into their best stretch of basketball all season.  The question is whether there are three more games at this level in the offing.  I would like to think so because I like where the players' heads seem to be added to the sheer talent and cohesiveness of this team.

There is plenty to be excited about right now and even more so if UNC continues to win games in this manner.