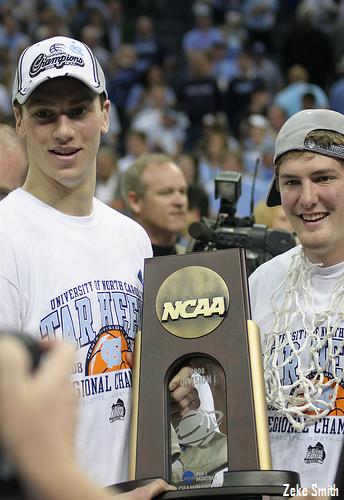 Hansbrough has his "no way in heck we are losing this game" moment and carries UNC to their 17th Final Four.

Over a year ago, the Heels faced Georgetown in the East Regional Final and squandered a 10 point lead down the stretch to see their season come to an end short of the Final Four.  In the 2008 East Regional Final UNC again found itself in a tough dogfight having given up a double digit lead when Tyler Hansbrough willed this team to the Final Four.  And make no mistake this was all about Hansbrough, especially in the 2nd half.

This was the game at Duke all over again.  UNC came out in dominant fashion and controlled almost every aspect of the game to build a 12 point halftime lead.  The problem you have when playing a well coached team with a head man who has been to five Final Fours is adjustments do happen.  And credit the Cardinals for coming out in the 2nd half and doing multiple things better on offense and to force UNC into more outside shots versus working for points on the inside..  The transition game was lost to some changes in the UL press which did not allow Danny Green, Marcus Ginyard and Wayne Ellington to run the court on the break. In fact Green and Ellington completely vanished save some good defense Green played down the stretch.   Ty Lawson was quiet in the scoring aspect of his game but made a huge three in the corner to move the lead from 4 to 7.  Lawson also had nine assists in one of his best games at running the pure point guard aspects of his position.

And while UNC got contributions from Deon Thompson and Alex Stepheson to go along with some key rebounding by Ginyard, it really came down to Hansbrough stepping up to hit big shot after big shot.  Ths is what a NPOY does.  28 points and 13 rebounds with the season on the line is the hallmark of a great player and in leading this team to 36-2 and two wins from a national title.  And in this case Hansbrough simply did not hit shots inside or grab rebounds for putbacks, not that is easy but pulling up from the 15-18 foot range drilling jumpers demonstrates to the Nth degree how badly Hansbrough wanted this one.    The confidence to take such clutch shots comes from his relentless work ethic to practice these things every day in practice.  Knowing you can make shots when your team needs it put this kid in a very special class, so special even Rick Pitino went as far as to say he has never seen a player work so hard on every possession as Hansbrough which is quite a statement considering where Pitino has coached.

In the end Hansbrough was tremendous and this team once more showed just how cool they can be under pressure.  This Tar Heel team possesses something special when it comes down to the brass tacks.  The nature of the game, the opponent, the style and even the score does not seem to matter.  Pure and simple, these Heels find a way no matter what it takes and if they find that way just two more times, these Heels will be national champions.