Is This A Problem?

Share All sharing options for: Is This A Problem? 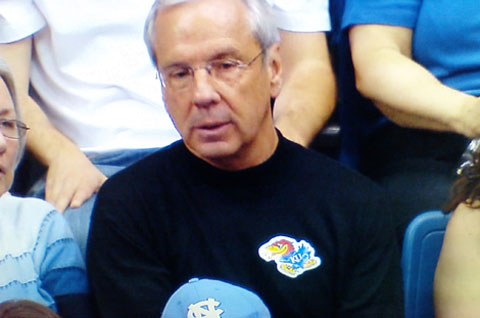 If you were watching the early part of the national title game last night you saw Roy at the game wearing a Jayhawk decal on his chest.  Little did Roy know, because he does not go on the internet is it immediately set off a firestorm at Inside Carolina with people saying some of the absolute dumbest things you could possibly say.  It was suggest that Tyler Hansbrough should go ahead and leave because of it or even that Roy should leave UNC.  Needless to say abject stupidity takes many forms.

The question is whether this is actually a problem?  I suppose that depends on your perspective.  For myself I really had no feelings on it.  Perhaps that is my even keel mode of operation showing but it just struck me as something that I really should not get all that concerned about because I just do not think it impacts anything.  I do not think he is less loyal to UNC by doing it nor do I think it affects his ability to continually make UNC the best basketball program in the nation.  Unlike a caller on 850 this morning who apparently knows nothing about recruiting, I do not think this is going to tip some five star recruit to choose Kansas over North Carolina. And I think we all know that Roy shares a great relationship with all his current players so I doubt they will have an issue with it either though the timing was probably not the best in the world given the events of Saturday night.

The only argument I have heard that comes to close to holding liquid is that Roy is the head coach at UNC and paid to promote UNC at every juncture.  He was seen on television promoting another school so obviously some sensibilities might be bruised here.  In the final analysis the logo was at worst unnecessary.  Anyone who has watched Roy enough knows he is a passionate guy and his love for Kansas probably is only a slight tick below his love for UNC.  For some Tar Heel fans the references to Kansas have never sat well with them and this only adds to that particular gripe.

For me, I just do not think those sort of things matter.  Roy came back to UNC the 2nd time he was asked, cleaned up Matt Doherty's mess and won a title four years after the team was 8-20.  Since then he has taken a team full of freshman to a 2nd place finish in the ACC, won 30 games and ACC Championships in back-to-back seasons, gone to the Final Four and recruited a slew of good players from now until 2010.  The product on the court has been exciting and the basketball program is operating at peak levels for the first time since Dean Smith was running the show in the mid-90s.  This is all to say that his body of work really serves to cover minor breaches in etiquette like this one. Honestly, take a look around at where UNC basketball is at right now and people are getting pissed off over this?  Or to quote the character Admiral Fitzwallace from The West Wing:

"I got some honest to God battles to fight, I don't have time for the cosmetic ones."

Update: I did take the liberty of fixing the photo to make people feel better. 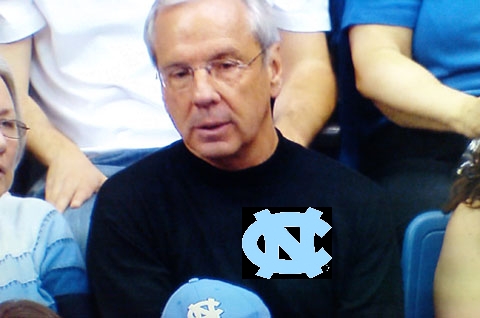