Greg Paulus Apparently Incapable Of Being Duke's Captain By Himself

Share All sharing options for: Greg Paulus Apparently Incapable Of Being Duke's Captain By Himself

I almost feel sorry for Paulus over this one. And by almost I mean there was a tinge of pity in my chest that may or may not have been heartburn.

Duke coach Mike Krzyzewski announced this morning that he has named senior Greg Paulus and juniors Jon Scheyer and Gerald Henderson as team captains for 2008-09. The move came just a year after Krzyzewski said he'd learned how using so many captains can dilute the abiility of those captains to lead.

That was the reason then lone-senior DeMarcus Nelson served as the lone team captain last season. Using multiple captains is a tough thing to make work but, this season, the coaching staff had no way around it.

Scheyer and Henderson must take charge of the 2008-09 Duke team. They made that clear after the way they played during the 2008 NCAA Tournament against Belmont and West Virginia with Nelson struggling during the postseason of his senior year.

Henderson took the ball and saved the game going coast to coast in the final seconds against Belmont. The play had Henderson's skill, athleticism and ability to complete a huge play came wrapped up in one neat package. That physical ability to seize a moment is something Duke has been missing for awhile.

First of all, I pick my spots for taking shots at Duke and this seems appropriate.  Mike Krzyzewski feeds the world tons of unadulerated poppycock about how he is a leader of men and his mastery of all things leadership oriented including talk of loyalty.  So do tell, Leader of Men, how does all of that square with screwing your lone senior out of being the sole captain one season removed from giving Demarcus Nalson that honor and justified it then by saying too many captains screwed up the team.  Nice flip-flop there K.  I have zero interest in defending Paulus here and only by sheer will power will this post end without me posting the Danny Green dunk photo again but what a sucky thing to do to a guy.  It is not like Paulus was some bench warmer for three seasons, he actually has been a key part of Duke's team and is their premier flopper.  I have to ask, if nothing else matters, who will teach the new guys how to dupe the ref into a charge call.  Please K, think of the children!

Seriously, this is probably a  sign that Paulus will not be starting next season and in order to avoid the sticky business of having his team captain spending more time on the bench in favor of Nolan Smith, K tossed Gerald Henderson and Jon Scheyer into the mix to cover.  Of course Chavez points out the demotion really came last season when Paulus was not named co-captain with Nelson which is to say K is hosing his senior PG twice in as many years. 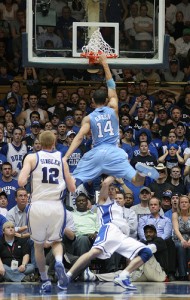