Share All sharing options for: A Carolina Fan's Guide to Santa Barbara

As I've mentioned before, prior to my current residence in our nation's capital - and no, you can't stay with me for the inauguration - I spent six years in the lovely city of Santa Barbara, home of UNC's next opponent and somewhat fiery paradise by the sea. (UNC's athletic department obviously hates me, scheduling a trip out there the year after I move away, but what can you do?) The amount of Carolina gear outnumbers the actual Carolina fans - chances are the guy on the street in an interlocking NC hat has no idea who Dean Smith is - but I assume an intrepid few will make the journey west. And since "intrepid few" also describes my readership, I figure I can give everybody the lay of the land.

First of all, this is UCSB's campus:

which makes it a nice place to visit, a great place to get a graduate degree, but not an ideal place to buckle down and master the game of basketball. Hence the Heels should not have too much difficulty in the Thunderdome. (Yes, they call the stadium the Thunderdome. No, I do not know why. It does not thunder.)

Before the game you'll probably want to get a bite to eat, and it's a great time to have actual authentic Mexican food, rather than the bland, oversauced stuff you're probably used to. There are a coupe of burrito joints a few minutes walk from campus in the ungrammatical Isla Vista, mainly Freebirds (not to be confused with the chain it spawned in Texas) and Super Cuca's. Either will get you a top notch burrito to give you more than enough energy to get you through the impending smackdown.

For a classier post-game meal, I'd head into Santa Barbara proper - UCSB is technically in Goleta, the Carrboro to SB's Chapel Hill - Roy was always a favorite of mine, and you can't beat the name. If you prefer seafood - you're on the ocean, after all, head to the Wharf or the Pier for either Brophy Bros. (loud), Harbour Restaurant or the Fish House. If you're a vegetarian, there's the excellent Sojourner Cafe downtown.

For drinks, it depends on your scene. If you like a lounge feel with god beer, there's The Mercury Lounge in Goleta, or it's stepsister bar Elsie's in Santa Barbara. If you prefer a more upscale feel, I always like Blue Agave downtown. And for more of a club feel, there Q's or Michael Jordan's bar, O'Malley's. (It not being Fiesta, Jordan probably won't be bartending, but you never know.

Tourism-wise, if you're staying for an extra day, it's worth to head north on the 101 to wine country. Pretty much any winery is good, but I'm fond of Kalyra (as seen in Sideways) it's neighbor Sunstone, Daniel Gehrs, Melville,  and Mosby. You probably shouldn't hit all of them. 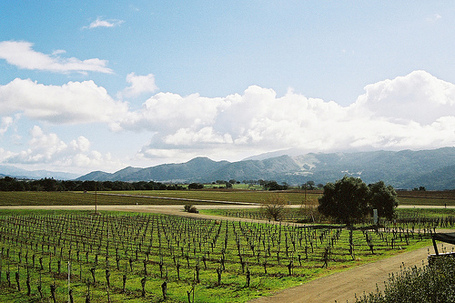 Oh, and hit up In-N-Out before you leave if you're from the East Coast. Trust me.