The regular season of great mediocrity parity in the ACC has ended.

Somewhere in Greensboro, John Swofford is weeping.  Weeping because instead of Maryland stepping up and knocking off Boston College to setup what would have been an extremely well attended Virginia Tech-Florida State ACC Championship Game, Maryland lost and setup a rematch of VT-BC from last season where the crowd looked like this: 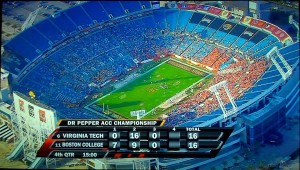 Yeah.  Virginia Tech will bring a crowd.  Boston College will bring the players' families.  Not the ideal situation but it is the ACC which has 10 bowl eligible team incindentally.  Makes you wonder what Johnny Come Lately bowl Clemson or NC State end up playing in.