Share All sharing options for: THF Official Endorsement For President

So today is considered the most sacred day in our two-plus centuries old democratic republic.  Today we go to our local polling place to, that is if you did not vote early, and cast a vote for someone to lead our great nation for the next four years.  It is a duty we do not take lightly.  There are many pressing issues facing our nation from an economy taking on Hoover-like consistency, crazy people in other countries who wants us all dead, people without jobs, cats and dogs getting along, etc, etc, etc.

In effort to solve these issues, we have two candidates who began their respective campaigns so long ago I think my third child may have still been living in Korea at the time.  It has been a long and arduous journey at which point many of us are probably very close to taking our own lives just to make it go away.  At any rate we will cast a vote for the candidate that shares our values and will best lead our country into the future as they endeavor to lift us out of the complete cesspool of hell we have been told we are living in for the past two years.  For some it is Barack Obama.  For others it is John McCain.  At THF, considering all the facts, the man who will accomplish those things which are important not only myself but Tar Heel fans everywhere and that individual is: 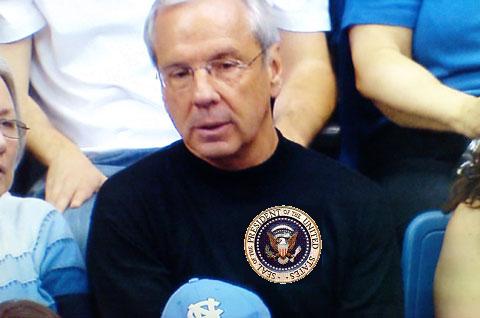 While there are plenty of issues which must be addressed, only Roy Williams can address those problems facing Tar Heel fans. In a Roy Williams Administration we can expect:

So while other coaches talk about being leaders and changing college basketball, Roy Williams does more than talk, he acts.  So this Election Day, use the write-in box to cast your vote for the man who can bring about the real hope and change we Tar Heel fans crave.

Note: Obviously voting should be taken seriously and you should make an informed choice based on you belief as to the best person to lead the country.  Just a little election day fun.