Hansbrough and Ford, in Charts

Share All sharing options for: Hansbrough and Ford, in Charts

I have little to say on Hansbrough presumed passing of Ford on the all-time scoring list against Evansville on Thursday. I do like making graphs, though: 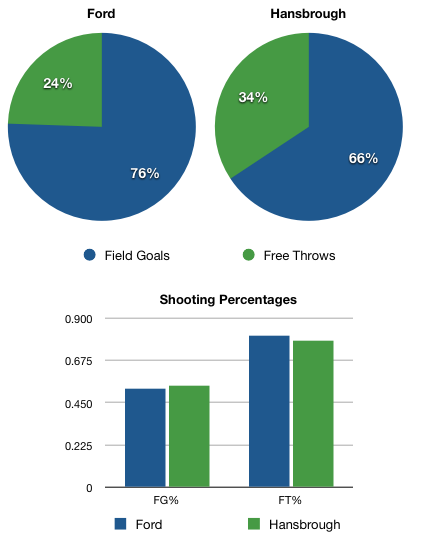 Hansbrough and Ford make for an interesting comparison, as neither player relies on the three-pointer, it not existing in the seventies and a trivial part of Hansbrough's game today. The number of games it took each player to reach this point is pretty similar, with Ford playing 123 games and Hansbrough 113. And given their relative positions, it's not surprising that Hansbrough racked up much more of his points from the free throw line, despite pretty similar shooting percentages for each player.