Share All sharing options for: De'Andre Haskins Should Walk A Mile First

Near the conclusion of the UNC-Valpo game Saturday, the Crusaders De'Andre Haskins did this to Tyler Hansbrough. 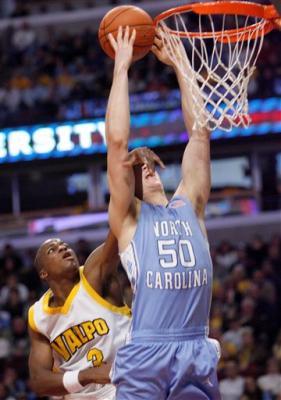 It was rightly whistled an intentional foul, the 2nd called on Valpo in the final minutes of the game.  After the foul Hansbrough bounced up with that same look he had when Gerald Henderson popped him with his elbow two years ago.  Cooler heads prevailed on the court but apparently Haskins had something to say about Hansbrough's reaction after the game:

With 3:32 remaining in the game, Hansbrough went up for a dunk and was fouled by Haskins from behind, sending the 6-foot-9 senior hard to the floor.

Almost immediately, Hansbrough's nostrils flared and popped up off the floor. Haskins saw for himself how intense the reigning National Player of the Year is, something he's seen on TV so many times.

He thought it was actually kind of funny, and unnecessary.

"I think it's disrespecting to the game of basketball to hop up and start fighting in the middle of the game," Haskins said. "All he had to do was get up and shoot the free throws.

"I didn't feel threatened by him."

Haskins was called for an intentional foul on the play.

First of all, I think it is rather disprectful to the game for a player to come up behind and attempt to rake someone's eyes out as they are going up for a dunk. Based on the photo there is no way he can say he is making a play on the ball.

Secondly, if I were Haskins I would consider the long history of Tyler Hansbrough on the court and understand why he reacted they way he did.  Hansbrough is constantly fouled and despite the brigades of ABCers who will tell you he initiates the contact so that makes it okay, there are times when players hack the Poplar Bluff senior just for the heck of it.  In fact Valpo and Evansville both acted like their primary intention was to foul first and ask questions later. Hansbrough's reaction was intense but more than that, when you have had your nose broken by a flagrant foul I imagine you probably react a little more passionately to being smacked in the face by an opposing player, especially when you were not expecting it.

And Haskins can say he did not feel threatened but based on Woody Durham's description during the radio broadcast Haskins did not approach Hansbrough until after the timeout.  If it was no big deal why not go up right away and apologize?  The other Valpo players apparently asked Hansbrough if he was okay but not Haskins until the TV timeout had passed.  Based on this I would venture to say Haskins either lack the courage or the class to step up on the spot and make it right.  I imagine it was probably an absence of both.