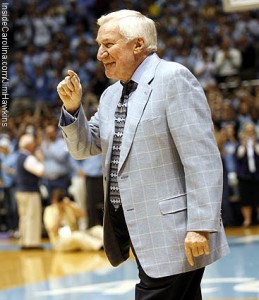 During halftime of the Virginia game on Saturday, UNC raised a new banner to the rafters, this one honoring all of the Hall of Fame inductees who played or coached at North Carolina. Among the individuals on hand were Billy Cunningham, James Worthy, Bob McAdoo and of course Dean Smith. It was good to see Dean Smith at the game and he drew the biggest cheer from the crowd when he came out, something I am sure bothers him. Much in keeping with his persona, Coach Smith maintains a very low public profile. Unlike Bobby Knight who cannot keep themselves out of the public eye and even toss their name around when major program jobs open up, Coach Smith quietly receded to the background content to see out his remaining years behind the scenes. Coach Smith eschewed the public attention he often received and preferred that the focus fall on his players. It was always about North Carolina as a team and not any one person and certainly not about him. Seeing Coach Smith again reminds us of his accomplishments as a coach but also of the classy way he conducted the business of UNC basketball. The reaction of the crowd in the building that bears his name certainly confirms that as does the way his great players still treat him as though he was their father in the way they interact with him.

As a side note to this ceremony on Saturday, Roy was asked what was the most important thing he learned from Coach Smith about treating players off the court:

"I don't think Coach Smith ever threatened to shoot anybody. So I didn't learn that. He may have behind--no he didn't even do it behind closed doors with the assistants. He had better vocabulary and better discipline.

I think the biggest thing I've learned from Coach is what you've seen from the program in the last week, it's that we make decisions about what's best for kids off the court, as with Marcus Ginyard, and it will be that with Tyler Zeller."

Roy was referring to the fact it was a good thing they don't give coaches guns earlier in the press conference. There has been discussion on THF about the way Coach Smith talked about the players in public versus what Roy does. This indicates that Roy is aware of the difference and probably thinks Coach Smith handled such things better than he does.