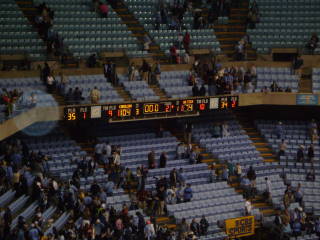 It was a sustained effort and probably the best start to finish effort this team has had in a while.  Coming off a loss it was precisely the sort of thing you love to see.  For the most part the Heels stay focused and continuing to take it at the Yellow Jackets even when things got out of hand.  There was a point where the 28 point lead was reduced to 20 but the Heels then reasserted themselves and end up crushing GT by thirty.

Needless to say Tyler Hansbrough loves playing Georgia Tech coming into this game averaging 27 ppg in four contests.  Hansbrough did much the same in this one scoring 28, collecting another double-double of which he has a zillion in his career and breaking the NCAA record for made FTs.  Not a bad day.  The fact Hansbrough enjoyed such a productive day means the Heels got back to basics which means feeding Hansbrough the ball and having the offense flow from there.  In establishing Hansbrough in the first half it opened up the offense in general.  Danny Green took advantage in the 2nd half and I am not sure he could have played much better. Green has 23 points on 8-11 shooting as well as filling in the other columns of the box score: 6 rebs, 2 assists, 2 steals, 1 block.   If Hansbrough and Green play like this in combination it is a certified nightmare for the opposing team.

Ty Lawson played what Roy called "the best game by a point guard without a field goal." Lawson facilitated the offense to the tune of eleven assists and he also did it playing only 26 minutes.  It became clear versus Maryland that the Tar Heels had been lulled into a false sense of secruity with the way Lawson had played against Duke and Miami.  It led to a perceptible shift in the offense and Lawson really began taking on too much.  The tough part of Lawson's job this season is understanding when he should be facilitating the offense and being the offense if all other options are closed off.  UNC's offense is all about balance and Lawson, not being a PG in the mold of Jeff Teague or Tyrese Rice, has first duty to moving the basketball.  Lawson is the cog that drives the whole offense. Sometimes that means taking the ball to the basket or shooting a three.  Most of the times it means getting the ball to his teammates.  It is a fine line he walks and one he will have to continually evaluate to make certain what he is doing is what the teams needs him to do in that game.  I imagine there will be key moments in the upcoming games where Lawson will need to do what he did at Duke and Miami and at other times be the point guard he was against Georgia Tech. The Heels chances at winning a title might hinge on how well Lawson walks that line.

One more note.  Tyler Zeller and Bobby Frasor had outstanding games.  Frasor just played smart, hustling basketball.  Zeller apparently picked up a lot from the week off looking much more in sync and comfortable with his role on the court.  Overall is was a complete performance and hopefully the first of many such game long efforts.