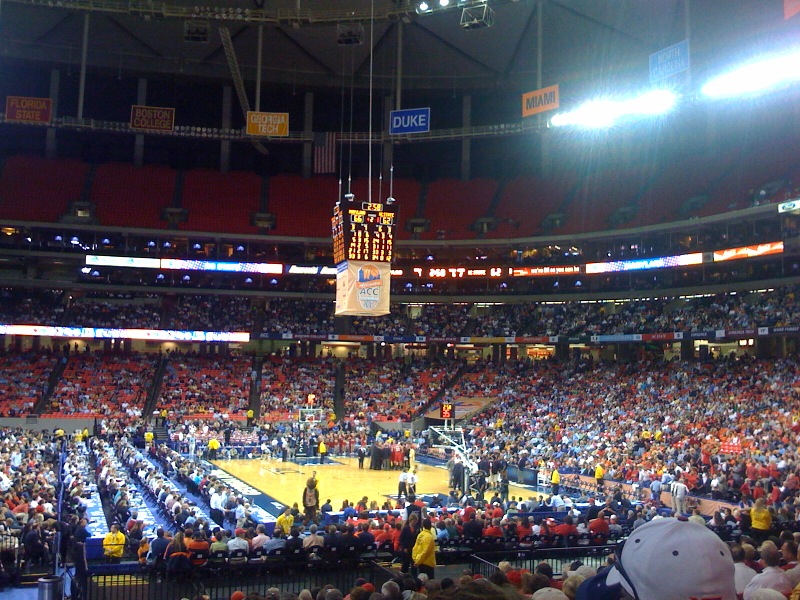 Hard to get a feel of this game. There was a mass exodus of State fans after the last game (something about having to milk the cows?) and the atmosphere in here is pretty mundane.

This game is like quicksand. Constant flow of people leaving. By the final horn, I expect there will be less than 2000 people here. I will not be one of them.

This game is unwatchable so I am signing off from the Dome. Next on location post will be at the team hotel in the AM.

Previous updates after the jump.

To their credit, State seems to have with stood Maryland's charge.  Vasquez seems to be taking over, which also means he's forcing it...

Maryland ups the defensive intensity and State gets better shots. Maryland doesn't have the athletes to press.

Why do people get excited to be on closed-circuit TV?

There are probably twice as many people here now, as there was this afternoon. It is significantly warmer and the outside shots are falling more consistantly.  I don't think that is a coincidence. Red seats are not a good background for picking up a rim.

State is showing why they go to MooU, and not the "Blue U."

Tom Burleson is all sorts of enormous.  Lots of ex-players walking around, but I'm having a hard time putting names to faces 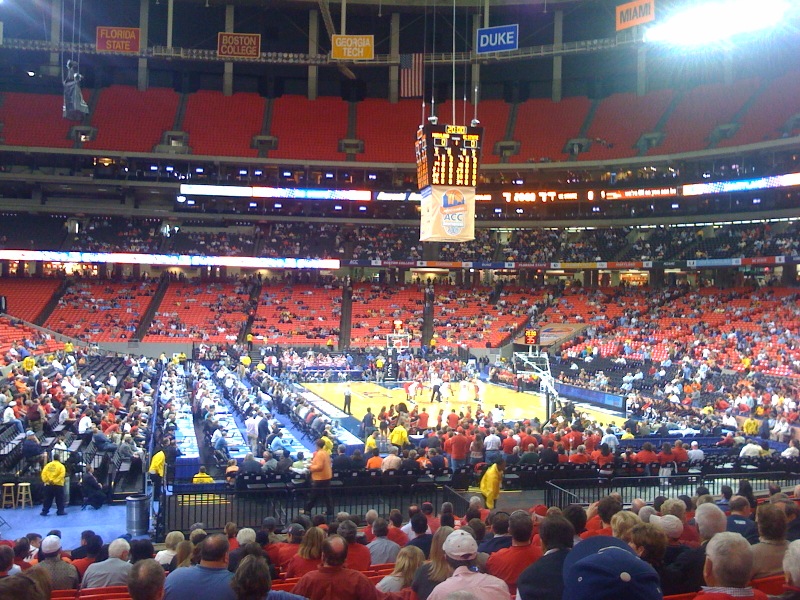 Once again, the higher seeded team comes out flat.  The hatred of Vasquez is palpable.

A giant tomato just sat down in front of me (a.k.a. a perfetly spherical State fan.)

I think some of the fans behind me just spelled "State" wrong.

It's Hayes or nothing for Maryland. He and Clinch have been the only ones to find the range today(THF: They must be color blind so the orange seats are not bothering them)

Even the Maryland mascot does the "Vasquez Jersey Pop," very annoying.  For anyone who has seen 9 Months, the scene where Hugh Grant and Tom Arnold beat up Barney comes to mind! ;)

Maryland really turned down the intensity the last ten minutes and played a very soft zone and State could figure it out. They looked as lost as farmboys in Manhattan.

The evening session. NC State plays Maryland and allegedly there is bad blood between the point guards over the Greivis Vasquez three at the end of the game in Raleigh.  Javi Gonzalez wanted to punch him.  If you are able to stay awake for it I am sure BC-UVa will be riveting.  Based on what we saw in the GT-Clemson game, it might be.

Comments if you have them.  C.Michael will be sending updates from the Georgia Dome.