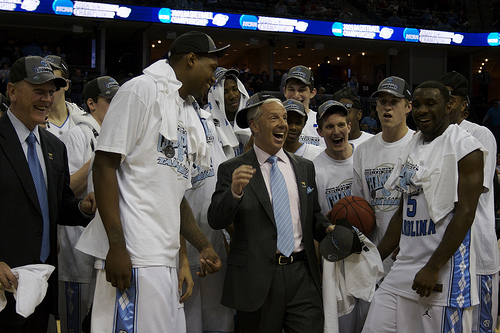 You know what is surprising?

I am not sure that UNC actually played that well offensively.  Yes, they shot 50% from the floor but the Heels were a bit off or so it seemed.  The fact Wayne Ellington 3-9 from the floor including 1-5 from three and Tyler Hansrbough only had eight points made it appear the Heels were not as effecient as they have been.  In the end Ty Lawson and Danny Green carried the load with a helping hand from Deon Thompson was more than enough to overcome Blake Griffin and...well...that was the only Sooner player that appeared to show up.

The battle between Hansbrough and Griffin was what everyone assumed would be the headline.  It never materialized.  Griffin got his with 23 points and 16 boards but UNC made sure no one else got anything leaving the Sooners with one offensive option. And yes, the officiating was a tremendous help since any time a Tar Heel player looked at Griffin a foul was called.  Still UNC methodically worked the game and were never ever really threatened save a 9-0 run late in the 2nd half which reduced a 21 point lead to 12.  From that point UNC held the line and punched their tickets for Detroit.

And it should be noted that UNC did a great job on the defensive end.  The Heels forced turnovers and challenged shots all game long.  Griffin did manage to score his average but UNC did double Griffin enough to force other Sooner players to take shots which they were unable to make.  Once again UNC answers the question about their defense and that is it can be good enough to win games even if the offense is a little ragged.

UNC now has the most Final Four appearances ever(18) and the most NCAA Tournament wins by one school(100).