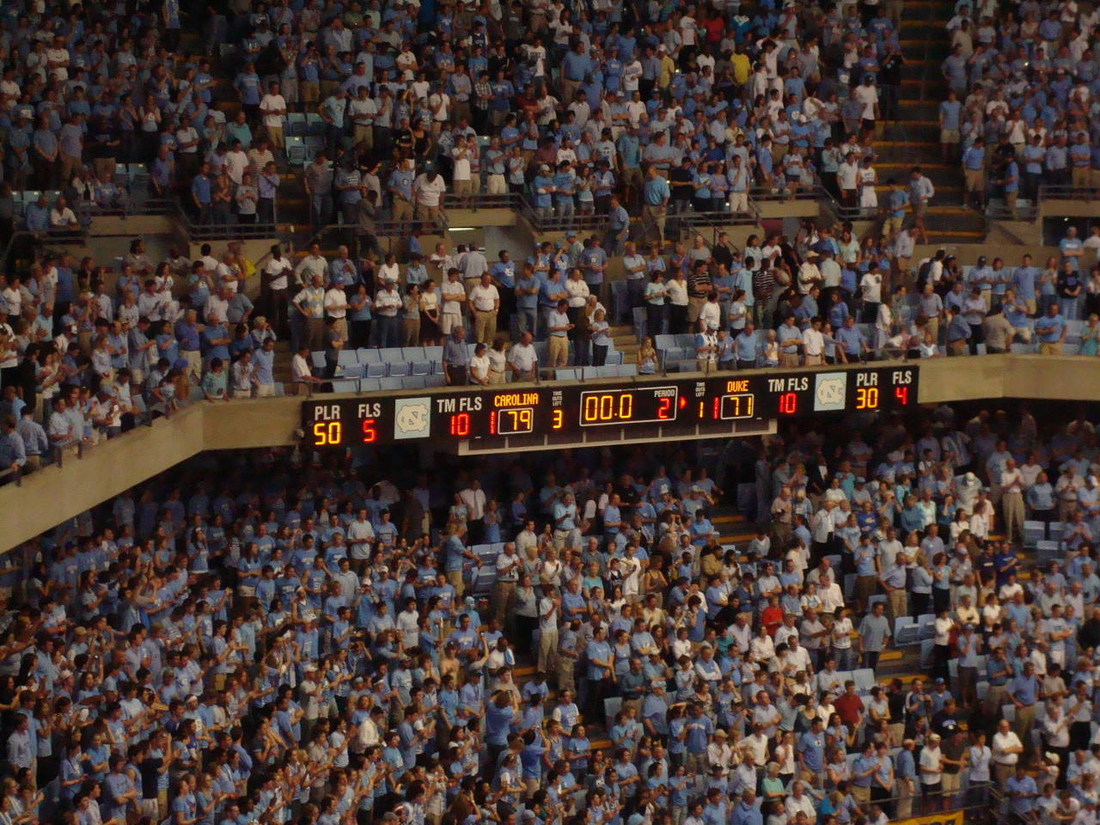 When the brackets come out next weekend, Duke could be a #2 seed and UNC will be a #1.  This game played out about what you would expect between a #1 and #2 seed in a regional final.  In that respect it gives me confidence going forward that UNC can handle such situations in the NCAA Tournament.  The Heels stepped up and played the game they needed to play.  It was not perfect, games involving college basketball players rarely are but in the end when Duke close it to two, the Heels made plays.  Danny Green hit a three.  Even on missed shots, the Heels got the rebound and then it came down to Ty Lawson, splitting the defense, taking Jon Scheyer to the basket and getting the "and 1" to make it a seven point lead in the final minute.  Carolina close the deal and finish 1st outright in the ACC for the 2nd straight season.

The box score on this one shows this was a balanced game for the Heels offensively.  Five players scored in double figures for UNC and it was almost like each player pick a different moment in the game to score a key basket or two.  Deon Thompson and Wayne Ellington were consistent.  Thompson picked up where he left off February 11th by continuing to score on the Duke interior defense.  Ellington has 16 points which had him shooting only two three pointers.  That is quite a twist and I know I have said Ellington's game does not include taking it to the rack.  He did so in this one and I am sure he immensely enjoyed outplaying his former high school teammate Gerald Henderson.

Tyler Hansbrough went out in style scoring 17 and hitting two three pointers before fouling out which is pretty ironic since it has only ever happened twice before.  I was a little surprised Hansbrough did not get more touches but the Heels did such a good job of spreading the offense out to the five regulars. In a way Hansbrough was a cog in a fairly effecient offensive maching that shot 53% from the floor for the game.  Danny Green likewise simply hit shots as needed though he was not without his own slips.  Still it was another stat stuffer game for Green: 12 pts, 4 rebs, 3 steals, 1 block.

Then there was Ty Lawson. Heading into this one there were doubts Lawson would play having injured his toe in practice on Friday.  There was also the fact Duke had a player who would do a better job defending Lawson than Duke players did last time out.  How does 13 points, nine assists and eight rebounds sound?  When the Heels needed a dagger to put Duke away, Lawson provided by taking Scheyer off the dribble and going strong to the basket, hitting the layup and getting the foul.  That three point play gave the Heels a seven point lead with a minute left which was more than enough.

What followed was something that simply made you smile.  Duke came down court and Gerald Henderson had the ball looking for a lane to drive when Bobby Frasor stepped in and tied Henderson up for a jump ball. Frasor, whose season has included more struggle than anything else made what can only be described as a smart play to step in and tie Henderson up to force the turnover.  Frasor also stepped in and took a change on Kyle Singler earlier in the game. How big did that end up being? Singler had to leave the game with his fourth foul late in the contest taking a threat off the floor.  Frasor will never make a huge impact on the game in terms of points or made shots but he is capable of making the smart plays and the opportunistic plays that turn the tide.  It was good to see Frasor go out like that.

In the end this was a balanced offensive attack and the Heels' defense was good enough.  I think it sets the right tone heading into the postseason and hopefully the first step towards a national title.