Lawson and Ellington Declare For The NBA Draft

Share All sharing options for: Lawson and Ellington Declare For The NBA Draft 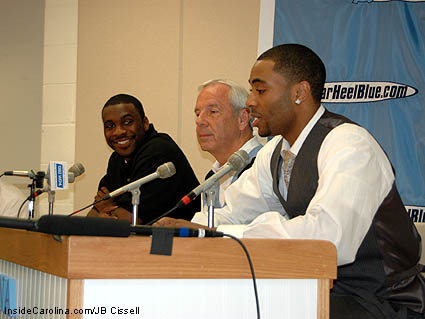 Why is Ty Lawson smiling? Because this is the last freaking time he has to sit in this room and answer inane questions from the likes of Eddy Landreth, Andrew Jones and Jeff "I'm Not The Only One" Goodman.

Ty Lawson and Wayne Ellington were part of a core group that over a three year period won 124 games, an NCAA title and generally dominated the pants of Duke. We can certainly debate this later but I am not sure UNC has had the same group for three years do what the Hansbrough-Green-Frasor-Lawson-Ellington-Thompson group has done.

Thanks for the memories guys. As Roy Williams said on April 6th, you guys are Carolina now. Ty Lawson will now be the gold standard for UNC point guards alongside Raymond Felton and Phil Ford. Wayne Ellington will be remembered as a deadly sharpshooter who silenced Littlejohn in 2008 and during the 2009 title run was every bit the shooter we thought he could be the day he arrived in Chapel Hill.