Share All sharing options for: Ty Lawson: The Early Years 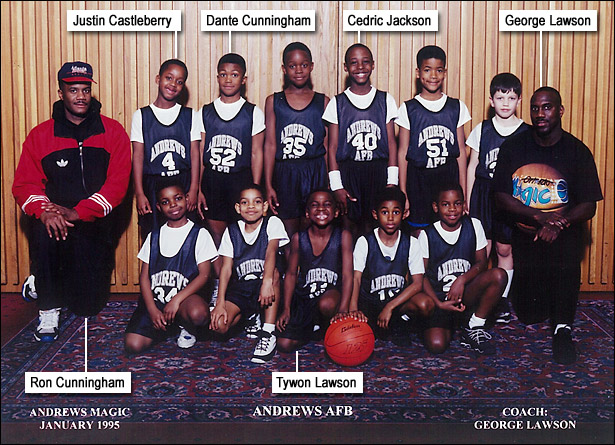 Since folks have already been talking about here is the always excellent Luke Winn and his column on Ty Lawson and Villanova's Dante Cunningham back when they played together on the same youth basketball team coached by their fathers at Andrews AFB in Maryland.

The Andrews Magic went 80-7 over an eight-year span that began in '95, regularly "playing up" -- against local competition at least 1-2 years older than their age group. Dante Cunningham said he recently looked through an old scrapbook that the two coaches had put together, and found a sheet in which they had asked each player -- when they were just 11 -- to state what college they dreamed of playing for. Dante wrote down Michigan, or Georgetown, which had recently been the homes of Chris Webber and Allen Iverson, respectively. Ty Lawson listed just one school: North Carolina. "When I saw that," Cunningham said, "I thought, 'Wow. That's crazy, that he already knew back then.'"

Long before Lawson would become a Tar Heel, win the 2009 ACC Player of the Year award, or be named the South Region's Most Outstanding Player, he was just a 4-year-old flying up and down the court with his father, who would bring Ty along to the Andrews gym if he agreed to do two hours of drill-work on fundamentals. The most famous were what they called "commando" ballhandling drills, where George would stand at midcourt and shout out a series of commands -- such as, in-and-out, crossover and behind the back -- as Ty dribbled at him. Ty eventually learned to perform the moves instantaneously. "You have to be able to do stuff like that in games without thinking," George said. "It got to the point where I'd be able to yell out five or six in a row and he'd finish them before he got to me."

Good story, be sure to read the whole article.