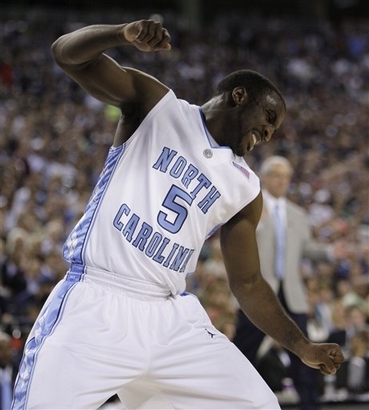 HEELS DISPATCH VILLANOVA
WILL PLAY MICHIGAN ST. FOR THE TITLE

I cannot recall a time when the offense looked good but statsitically was below average.  The fact the Heels were 11 for 22 from three point range while missing easy twos in bunches both gave the offense life and pulled the numbers down.  Regardless of the way the shooting went from the floor and the free throw line, the Heels controlled the game against Villanova and on Monday night will play for UNC's fifth NCAA title in school history.

This game was won by a strong defensive effort.  Roy William will probably say that Villanova missed some open shots and also point out the Heels got outrebounded.  While that might be true,  I also know UNC has begun guarding the ball with what Roy calls "a sense of urgency." The effort on the defensive end more than made up for some of the bad shooting as Villanova entered Shammond Williams territory for poor shooting beyond the arc finishing 5-23.

When the Heels are balanced, they are pretty much unstoppable. That was the case.  Early on Ty Lawson, Wayne Ellington and Danny Green all hit threes.  Tyler Hansbrough had plenty of opportunities to score and ended up with 20.  Still this team is riding Ty Lawson's hot hand who tallied 22 points, eight assists, seven boards and two steals. In other words, Lawson continues to manage the game with remarkable reliability despite committing four turnovers.  In short the junior point guard is going everything asked of him and then some.

And the play of Bobby Frasor cannot be underscored enough.  Frasor had seven rebounds, five of them offensive, all of them from relentless hustle after loose basketballs.  They were basketball savvy plays from an experience and smart senior guard.  Having a player like Frasor stepping in to grab a board or make a key play might be the difference come Monday night.

It was by no means a perfect game. The Heels missed far too many free throws, did not shoot well overall and got out rebounded.  However none of that matters at this point in the season if you win.  The Heels found a way.  When they needed a play to stem a Villanova run to cut the lead to five, they got it from Danny Green.  If they needed a key rebound or stop, they managed to come up with.  It was a level of toughness long question of this team but clearly no longer an issue.

Now UNC moves to the first Monday in April with a chance to put a storybook finish on this season. See you all then.