Share All sharing options for: Roy Loves The College Game 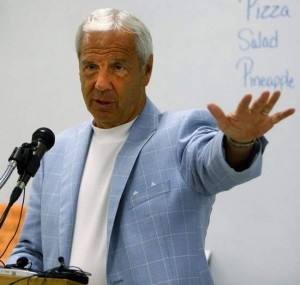 Interesting piece out of Springfield, MO where a very tan Roy Williams was in town to speak at a local Boys & Girls Club benefit. Roy spoke at length at how special he thought Tyler Hansbrough would be even back in 2004 when Hansbrough, as a junior, dominated a local high school tournament in Springfield. Roy also said he has been offered an NBA job 11 times, three of them coming from UNC alum Mitch Kupchak of the LA Lakers. It turns out he loves being with college kids and being in college towns. He is also immensely gratified that the 2005 championship meant his family and supporters no longer had to defend him. In my mind the 2009 title did even more to cement Roy's place as one of the great college basketball coaches of all time. Roy himself would say I am frickin' nuts for saying that but the evidence is pretty frickin' convincing. As for what he considers the most thrilling moment of each title run it is nearly being crushed to death by his starting center:

Williams said two of the biggest thrills of his life were hugging UNC forward Sean May after the 2005 title and seeing Hansbrough's face after the Tar Heels' 89-72 victory over Michigan State this year.

"The look on his face was like a 3-year-old who went into the candy store," Williams said of Hansbrough. "He grabbed me and hugged me and almost broke my back."

Man is it great to be a Tar Heel basketball fan right now.