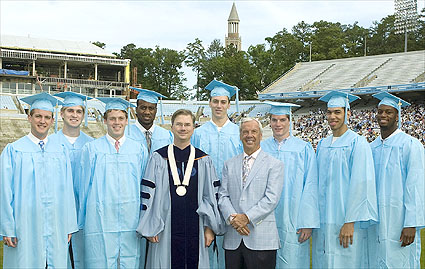 Hard to argue with those results. I may have mentioned this before but prior to UNC winning the 2009 title, ABCers loved to play the "Roy won the 2005 title without his own players" card to discredit him. Note the mindblowingly awesome way in which Roy crushed that particular meme. With someone elses players, Roy simply won a national title. With his own players, UNC was an incredible juggernaut that crushed the life out of six NCAA Tournament opponents to cap off 124 wins in a four year span which included also 101 wins over the final three seasons. For those who do not care to calculate that is 33 wins per season when you toss the 2006 recruiting class into the mix.