Share All sharing options for: What I Want To Know...

...is who allowed T.J. Yates out of his protective bubble. 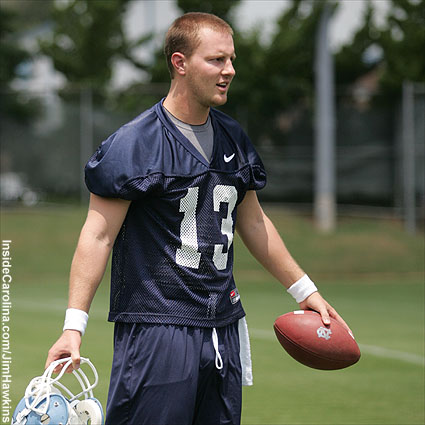 Training camp is in full swing now. Nothing earth shattering aside from the fact we have now taken to tracking the movements of Donavan Tate. For those who do not know, Tate is a two sport recruit drafted 3rd overall by the San Diego Padres but it still thinking about coming to UNC to play both football and baseball. His whereabouts were the subject of message board chatter and Twitter updates over the weekend and at last check he was indeed on campus. Personally I think Tate would be a fool to risk his baseball career by playing football at UNC(see NCSU's Russell Wilson and his many injuries as big reason why) since he has already been drafted in a very high spot. Apparently August 17th is the deadline for him to sign with the Padres or attend college for three years.

In other news, Shaun Draughan gets feature treatment from the N&O highlighting his faith as well as his ambition in convincing the staff to move him to RB last season.

T.J. Yates does a Q&A with ACC Sports Journal in which he discusses the situation on offense. Yates is high on the receivers and I would expect nothing less. There is also a question about whether Yates, a former PG, ever played against Ty Lawson.

"I actually played some pickup with him a couple years ago. He was just messing around. His shoes weren’t even tied. Dribbling the ball behind his back."

What Yates probably does not realize is Lawson's shoes were never, ever really tied, at least not as much as we all thought they should have been.