Share All sharing options for: My Blatherings Now Available in Concise, Useless Form 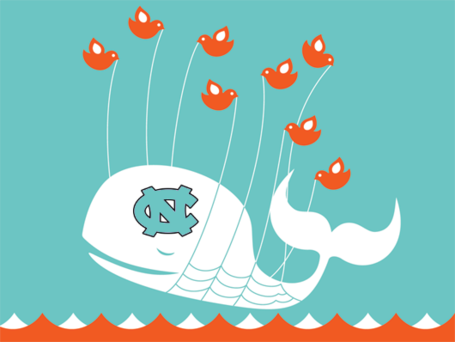 You may have noticed the rash of logos at the bottom of every post that started appearing a few months ago, all devoted to social media and the Web 2.0 and everything else that occasionally distracts journalists from the dying newspaper business. (Be lucky you don't live in D.C., home of the fifteen front page stories about Facebook.) About the time those popped up, SB Nation made a big push to get all of their bloggers on Twitter, with contests to see who could get the most followers, and general brave leap into yet another online medium.

I stayed as far away from that as possible.

Once the hoopla died down however, I did poke around Twitter for a bit, as the software guys have done some nifty incorporation between it and the blogging platform; I grabbed an account, followed some people, and tried to figure out what I wanted to do with it.

I still don't know what I want to do with it, but I quickly decided I didn't want it to be a glorified RSS feed, which are particularly boring. Nor did I want to trade tweets with Marcus Ginyard, who hopefully has better things to do with his time. I did find some people worth following though, and began tossing the occasional thing up there. With this being UNC's off week in football and thus this Saturday being open thread free, I thought I put it out to the world at large: I have a twitter feed. Consider it a DVD commentary on blogging, or don't consider it anything at all. Nevertheless, it's there.

And yeah, this whole post is an excuse to run that image at the top, which is probably my finest artistic accomplishment.