The Curse of John Bunting Is Upon You, Bobby Bowden

Share All sharing options for: The Curse of John Bunting Is Upon You, Bobby Bowden

Ah, John Bunting. He of the 27-45 coaching record, the nine games of giving up 45 points or more, and such wise decisions as not starting a future Super Bowl MVP or three straight years. But there are worse things than being a fan of a John Bunting-coached team; you could be a coach losing to such a team.

16 D1-A coaches did exactly that in John Bunting's six seasons as head coach, and unsurprisingly, most of those opposing coaches no longer have their jobs. In fact, only five of the sixteen avoided the axe: Tom O'Brien jumped ship to head up N.C. State, while Kyle Whittingham still patrols the sidelines of Utah and Jim Grobe and Al Groh still hang around the ACC.

And then there's Bobby Bowden.

Bowden, of course, has been at Florida State since roughly the Neolithic Era, and if there's one coach who could whether the scarlet L of losing to John Bunting it would be him. But Florida State didn't just lose to North Carolina in the fall of 2001, they were crushed, 41 to 9: 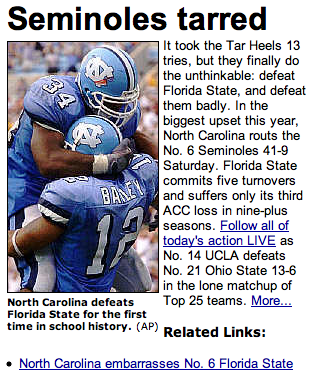 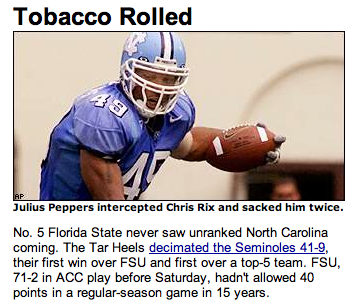 That was pretty much the high water mark for both Florida State and the Bunting era, and the Seminoles haven't been the same. They've yet to rise that high in the polls since. They're ACC record was 71-2 before that game, 43-24 since. And now, of course, they stand 0-3 in the conference, with Bowden fending off the wolves at the gate. He has only himself to blame, however, having hired quite possibly the biggest victim of the Bunting curse back as Associate Head Coach and Linebackers Coach. The defense, to put it politely, has not improved.

Enjoy Thursday night, Bobby Bowden. The curse catches up with everyone eventually.