Share All sharing options for: Video Of Barnes' Announcement

Well spoken, thoughtful, smart and quite an impressive public speaker. Regardless of anything else Harrison Barnes might do as a Tar Heel, we can say for certain right now he will represent the university and be a leader on the team. And kudos for using Skype to put the "winning" coach on the screen. All those shows Tar Heel Wife watches on HGTV say it is all about the reveal and Barnes did it in a dramatic fashion.

For more on Barnes decision, check out Jim Young's piece at ACC Sports Journal which includes this gem of a quote from Scout.com's Dave Telep:

Instead, landing Barnes just bumped Roy Williams’ reputation as a recruiter up to mythical status.

"This only furthers the legend," Telep said. "He is awesome when it comes to the acquisition of talent."

As happy as UNC fans are right now, I do want to sound a word of caution. Yes, UNC basketball program won today and yes, UNC beat Duke at something which is always fun even if it is crossing the street. Getting a #1 ranked recruit to commit to UNC and shun Duke in the process is a true rivalry moment and something to celebrate. That being said, this is but one step in the large ongoing battle. Harrison Barnes, for all his potential has yet to play a minute of basketball for UNC and what we are operating on right now is the potential we believe this young man has as a basketball player. Now, recruiting rankings are generally spot on, especially when talking about the #1 ranked player in any class. The one exception that comes to mind is Josh McRoberts in 2005 who flopped mightily at Duke after being touted like Barnes is now. That is not saying Barnes is another McRoberts but it is a cautionary tale about what could happen.

UNC fans have plenty to celebrate today and while this commitment wides the gap between UNC and Duke, it is not like the Blue Devils are bringing in a bunch of invalids next season. Duke has an elite PG committed in Kyrie Irving and plenty of solid players to boot. Granted Barnes would have given the Devils another elite NBA-type talent which would have vaulted them into Final Four contention. Even without Barnes, Duke is still dangerous and still right behind UNC to some extent. Any team with an elite PG can do all sorts of damage. Along with Irving, Duke will have Seth Curry, Nolan Smith, Andre Dawkins and the Plumlees. That team will be balanced and talented enough to give the Heels some trouble. So like any time UNC wins, celebrate this one tonight knowing there is still plenty of basketball to be played.

And since we are still in celebration mode, a friend suggested this would be an appropriate image to characterize the day. 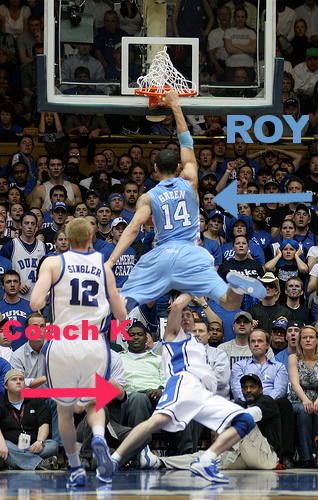