Fresh off my brilliant performance prognosticating the ACC Tournament, I sat down this evening and dug up all those e-mails inviting me to various tournament challenges [*] and began filling out my brackets like every other schlub. Unlike last year, I'm cutting back on the number of these things I'm doing, sticking to two friends' and the SBNation backchannel one, and I'm only using two brackets, because it just got to confusing last year. The two brackets are pretty similar - one has UNC beating UConn, the other UNC over Louisville in true homeriffic fashion - and both were filled out on the fly, but here are some quick thoughts.

Below the cut, a full bracket. Just not yet, as I have somethings to do before I wrangle the interwebs into sticking it up here. 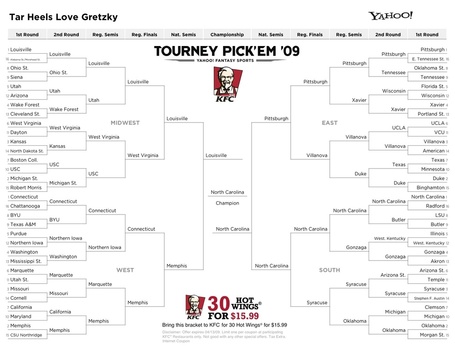 Click to expand. Apologies for the fast-food ads; in compensation here's Patton Oswald with the Democratic response.