Everything I Know About Radford

Share All sharing options for: Everything I Know About Radford

Radford: Tall and athletic for the Big South Conference, Radford works the ball inside to man-mountain Artsiom Parakhouski, who gets to the line (182nd in FT rate) and crashes the boards at both ends (top 50 at grabbing both offensive and defensive rebounds). He didn't see too many players like Tyler Hansbrough in the BSC, however, and Radford did not play up well: they had no Division I wins outside of the conference.

First of all, how have I not known there's a college basketball player named Artsiom Parakhouski? Parahouski, originally from Minsk, Belarus, averaged 16.3 ppg and 11.2 rpg in this, his first season at Radford after two years at the College of Southern Idaho. He's 19th in the country in Pomeroy's offensive rebounding percentage and after dominating the Big South championship compelled VMI's coach Dugger Baucom (this post is overflowing with awesome names) to say: 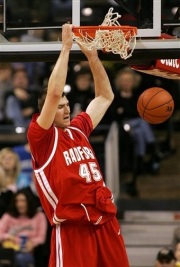 "Art was a house inside. He has no business playing in this league. He could play anywhere in the country. We played [Kentucky's] Patrick Patterson and he's every bit as good."

(Patrick Patterson went 8-11 for 19 points and 11 rebounds against the Heels back in November. UNC won by 29.)

Outside of the Belarussian big man, there's not much to say about the Highlanders. They're a team of veteran players, with only one sophomore getting any serious playing time among juniors and seniors, and not surprisingly rarely turn the ball over. They take very few outside shots, and get to the free throw line much more often than their opponents. They also ran roughshod over the Big South conference, going 15-3 and have won 17 of their last 19 games.

Unfortunately, there's a little problem once they leave their conference. They lost to Wake Forest by 22. To West Virginia by 35. To William & Mary by 20. To Virginia by... 2. You know, I'm beginning to understand why that nice Mr. Leitao isn't with us anymore. In other words, UNC should, even without Lawson, roll.

Fun fact: Radford started out as a women's college with the snappy name the State Normal and Industrial School for Women at East Radford. It was merged with the present-day Virginia Tech at one point, taking the name the Women's Division of the Virginia Polytechnic Institute. In 1964, the Hokies decided the threat to their precious bodily fluids was worth sharing a classroom with the womenfolk, and the place was spun off as Radford College, which lasted three seasons on ABC. In 1972, they let guys in, leading a mere eight years later to the arrival on campus of Steve Robinson, who would go on to be the head coach at Florida State and later assistant coach at UNC. (He could be a plant! Keep him way from Lawson's toe!)

Picture and a fair bit of information from the invaluable Mid-Majority.