The women's regular season ended yesterday, with UNC falling to Duke in an overtime stunner most notable for the Heels' 33 turnovers, including one that let to the game-winning three pointer. The loss left Carolina in fourth place in the ACC, putting them on the same side of the tournament bracket as top seed Maryland: 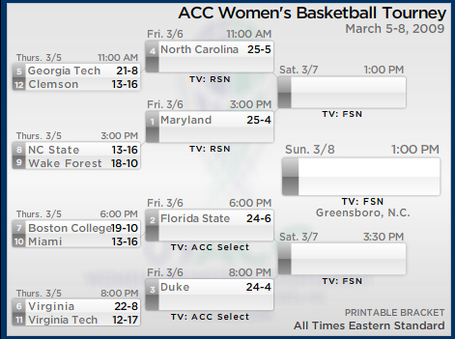 The Terps beat UNC in their only meeting this season, a 77-71 game in College Park and the final game of a three game losing streak. And although Maryland has more losses than last season, by the numbers they're an even more impressive team: 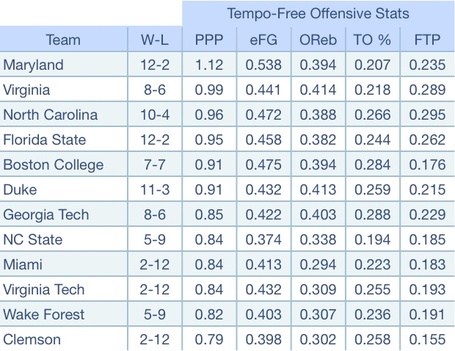 This is a team that was already an incredibly efficient scoring team last season, and they've only improved, now scoring more points per possession than any men's team except UNC. They have a better shooting efficiency, mostly on the back of Krista Toliver's 75 three pointers. They've cut down on their turnovers, and kept up their rebounding prowess. If they have a weakness, it's on the defensive end: 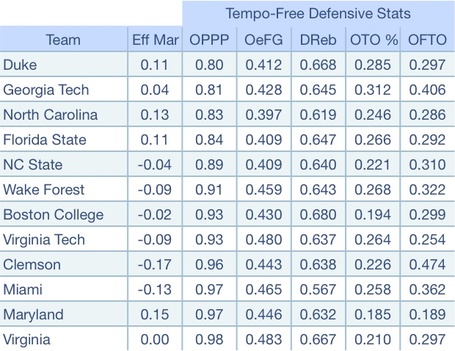 They've suffered a bit of a lapse since last season, but so has UNC. Carolina's has the best defense in league to shot down an opposing team's shooters, but their big problem is their propensity to turn the ball over. Of course, they kept that well in check in College Park and still lost, so I'm not sure what else they can do. A four year streak of ACC championships is on the line.