My Problem with PASE

Share All sharing options for: My Problem with PASE

Both Basketball Prospectus and Yet Another Basketball Blog have been extolling the values of PASE (Performance Against Seed Expectations) as a better evaluation of conference performance in the tournament than win-loss records. Which it is, but that's because practically anything is a better evaluation that unfiltered wins and losses. But PASE has it's problems at well.

Part of it is that with only four to seven teams per conference spread across various seeds makes it hard to evaluate even with PASE, which is better suited for evaluating coaches over ten to twenty year periods. With small sample sizes and wins and losses coming in full-game increments only, average seeding performance also stacks the deck. A one-seed has to go all the way to the Final Four to help his conference as much as an eight seed does just by winning it's first round game; a 10-seed actually has a higher expected performance than a nine. Nor does PASE really factor in the quality of opponents. A one seed who travels through a nine, a twelve and a seven is judged just like one that had to meet an eight, a four and a two. The Big East is at a serious disadantage this season even before WVU's flame out. If Louisville, Pitt, and Connecticut don't all make the Final Four, Syracuse or Villanova will have to highly overachieve just for the conference to break even.

I prefer to use a simple adjusted win-loss, adjusted for games with more than a four-seed differential. Quite simply, if you beat a team more than four seeds beneath you, the win isn't counted. If you lose such a game, it's counted twice. The reverse goes for teams playing four seeds above them. Thus a one seed won't win a game that effects conference performance until the Sweet Sixteen at the earliest, while eleven-seed wins and above are given value more appropriate to their accomplishments. 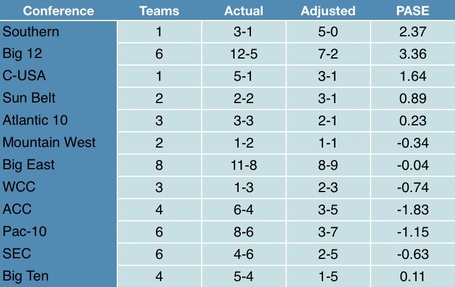 The conference I think PASE overrewards the most is the Big Ten, who only beat one team seeded higher than 11th (Michigan State, a five, beat Pittsburgh, a four) and whose best team Wisconsin faced a 14, and 11, and a 10, the last being a Davidson team that soundly beat them. The ACC does a little better than PASE would have you believe, but was still pretty bad, an assessment I agree with, and the Mountain West comes out ahead, as it only had two eight seeds in the tournament, and the one who made it out of the first round, UNLV, was rewarded with the buzzsaw that was Kansas.