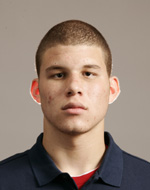 Which, at least judging from the interviews I've seen, are flat, lifeless, and opposed to funding the D.C. Metro system.

Those dead, dead eyes belong to a potential player of the year, though, and the primary engine behind an Oklahoma team jockeying for its third Final Four appearance. And his numbres are impressive, from the way he hoovers up rebounds on both sides of the ball , to the fact he's one of two people who draw more fouls than Tyler Hansbrough. (The other? Devon Clark of Iona.) Only three teams have managed to beat the Sooners with a healthy Griffin on the court. How will Carolina make it four?

Well, it helps that the biggest weakness for the Sooners is also among UNC's greatest asset - speed. Arkansas blitzed out to a 25 point lead back in December before winning by eight in a game with seventy-eight possessions. We've all seen what Missouri did in the tournament before losing to Connecticut last night; they beat Oklahoma by nine with that same swarming defense and up-tempo play. Even Oklahoma State, the Sooners third loss, prefers to push the pace of the game, although they're usually less successful at it than other teams.

So UNC definitely has the speed to give Oklahoma fits; the fact that the Sooners aren't known for being a turnover-generating team helps in that regard as well. Nor is Oklahoma particularly deep, as they rarely play more than seven or eight in tight games. They don't really have anyone who can stop Lawson, and they like to bait opponents into shooting the three - with good reason, since you have Griffin underneath to corral the misses. Good nights from Ellington and Green will give Oklahoma fits. Bad nights from those two could cost the Heels their season.

The Hansbrough-Griffin matchup is what will get the majority of the spotlight, and I fully expect Griffin to come out on top there. His team relies on him more, and Hansbrough will b much more likely to kick out to the wings rather than take a bad shot for pride purposes. But if Griffin wins the boxscore line, the Heels should still win the game. It may be a lot tougher than UNC's tournament road to date.