Is Tom Izzo the Greatest Tournament Coach of His Generation?

Share All sharing options for: Is Tom Izzo the Greatest Tournament Coach of His Generation?

Pete Thamel made a curious claim twice this weekend, first in a blog post and then in a Final Four preview, that Tom Izzo is "the best NCAA tournament coach of this generation." I found this odd, since I'm partisan to another coach also in this year's Final Four, so I thought I'd run a comparison: 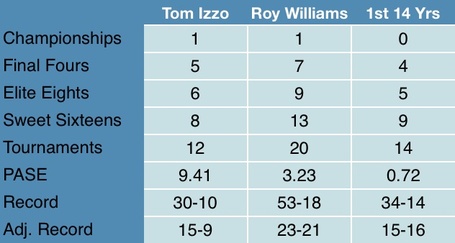 That last column is Roy Williams' first fourteen years (minus the year of ineligiblity leftover from the Larry Brown tenure), the length of Izzo's current stay at MSU. Adjusted record is something I made up.

There's not much of a difference in accolades, just in PASE, really. I think Izzo's impression of invincibility comes from his meteoric rise - he hit his streak of three Final Fours beginning in his second year of tournament appearances, and won the title a mere five years into the job. Williams, on the other hand, had years of being branded a choker, despite hitting two Final Fours in his first four years in the tournament. It's worth noting that Roy is 2-0 against Izzo in the tournament, and the third time they were supposed to meet, George Mason beat them both in the tournament's opening week. (MSU got it worst.) Maybe Izzo is the best of his generation, with an impressive PASE, but it's not as cut and dry as you may think.