I thought I had a good insight into the UNC-Duke coaching battle, based on my thinking most games have recently have been like the match back in February, or the game today for that matter. UNC jumps out to a lead before the first timeout, Duke claws their way back to lead at the half, and it's neck-and-neck until around the eight minute mark until Carolina pulls away. Conclusion: Williams better prepares his teams for the game, but Krzyzewski is better at in-game adjustments while Roy waits until halftime. Unfortunately, my memory is faulty, and that's not the way most games go: 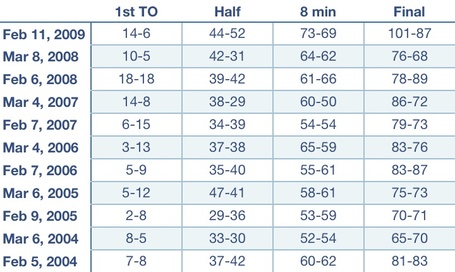 It's Duke that usually had the early lead, at least in the Redick era, while the halftime score is pretty even. Draw your own conclusions, I suppose.