After All, Who Pays Attention to the Last FIve Spots on the Ballot?

Share All sharing options for: After All, Who Pays Attention to the Last FIve Spots on the Ballot?

Dr. Saturday comments on the lack of Big East love in the AP Poll:

But that predictability in itself is another not-so-subtle slap at the Big East, which once again failed to land a single team in the top 25 of one of the major polls; Pittsburgh led the voting at No. 28 in the "Also Receiving Votes" category. [...] I'm willing to go on record and predict the Big East champion will finish in the top 25 (even Pittsburgh made the cut in 2004). But the poll is ipso facto an indication of where the public opinion stands at the moment, and again, it's definitely not with the Big East.

Like I was saying before, I think it's less an indication that the Big East is going to suck so much as a sign that no one really knows how the conference will shake out this season. Looking at the individual ballots, only 16 of the 60 voters failed to rank any Big East team, and seven went as far to put three Big East teams on their ballot. If instead of picking between Pittsburgh, Rutgers, and West Virginia (or Cincinnati and South Florida, who made 11 and 3 ballots, respectively) the voters were just putting Generic Big East Champion on their lists, Ol' GBEC would pull in a respectable 229 votes, tying them with Iowa at Number 22.

That's the problem with preseason polls; once you get out of the Top 10 or 15 teams, there's little consensus of who should make the rankings. Instead, everybody throws up their wacky ideas, which are promptly codified. Once the first week's games are in the books, the voters will go back to the preseason poll and adjust their rankings accordingly; Notre Dame, having made it to 23rd on the recommendation of 30 sportswriters, will get a lot more votes than Oregon State, stranded in the Also Receiving Votes category with only 26 nods of encouragement. Once you get beyond the unanimous (or in Georgia's, California's and Boise State's case, near-unanimous) picks, the data becomes really noisy really fast: 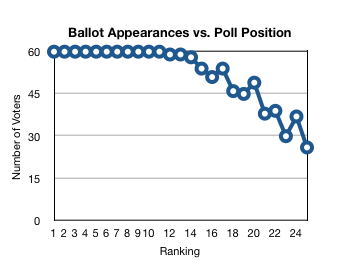 I went through the ballots this evening and adjusted the vote totals to produce a more accurate representation of what I think the voters were thinking. The Top 15 sots are the same, being near-unanimous, but here's the rest of your top 25: