The North Carolina Sports Hall of Fame has named its 2010 class and three Tar Heels are among this years honorees: 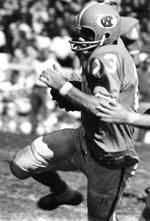 Another Tar Heel legend who wore #23