The 2009-2010 University of North Carolina men's basketball season was officially pronounced dead Saturday, February 20, 2010, at 2:02 P.M. in Chestnut Hill, Mass. The season had been in declining health after suffering a what would prove to be a mortal injury in Charleston, S.C. in January. The program was 100.

(Please forgive the macabre opening, but that's just where I am right now)

Somewhere down the road the 2010 Carolina basketball season will be the subject of someone's honors thesis in coaching and sports psychology.  It is hard to believe that the team that has played the last two games in a North Carolina uniform is the same team that beat two top-15 teams and fought valiantly against two (now) top-5 teams earlier in the season.  This team has had a complete systemic failure in every aspect of the game, so much so that twice against BC, the Tar Heels inbounded the ball to...nobody.  That's right, it's so bad the Tar Heels can't even throw the ball unguarded from one player to the another.  It's difficult to remember, as UNC sits at 14-13, that this team was once 12-4 just a scant six weeks ago.

There has been much teeth-gnashing and hand-wringing, even right here at THF, about the fact that this team is just not very good.  I just don't buy it.  This team was good enough to roll up Michigan State and Ohio State, and to compete on the road against Syracuse, Kentucky and Texas.  Through the non-conference season, UNC didn't always blow people out, but they weren't really in danger of losing, either.  There was no reason to think on New Year's Day what the year ahead would hold.

I would love to know what went on in Charleston because the team has never been the same since.  Prior to the College of Charleston game, Carolina seemed on track to fulfill expectations and improve game by game.  After the Charleston game, however, the team started a downward spiral that has resulted in the squad's 3-9 record in 2010.

Obviously when things fall apart to this level, people look for the quick answer, and it's just not able to be found with this squad.   Duke in 1995 lost its coach.  UConn this year also lost its coach, but the Huskies weren't tearing it up prior to then, either.  UCLA this year has been decimated by injury.  Carolina has had its share of injuries this year (THF has a great summary here) but only Tyler Zeller and Ed Davis have missed extensive time.

Certainly some areas of UNC's expected development have not happened. The supposedly powerful front line was exposed against Texas and has been ineffective ever since.  Marcus Ginyard was playing relatively well before his injury and has never returned to that level.  Despite decent numbers on the stat sheet, Larry Drew has never really passed the sniff test as Carolina's point guard.  The Heels have also never developed a consistent big-time scorer either inside or outside.

It would have been different if UNC had struggled out of the gate and was intermittently winning and losing to get to 14-13.  But to go 3-9 over the last 12 - and really not terribly competitive in most of those 9 losses - is beyond comprehension. The team can't shoot, can't score, can't defend, and doesn't play with any urgency or fight.  I have only seen supposedly top-notch players fall off like that once before - and it was because aliens stole their talent to play against Bugs Bunny and Michael Jordan. 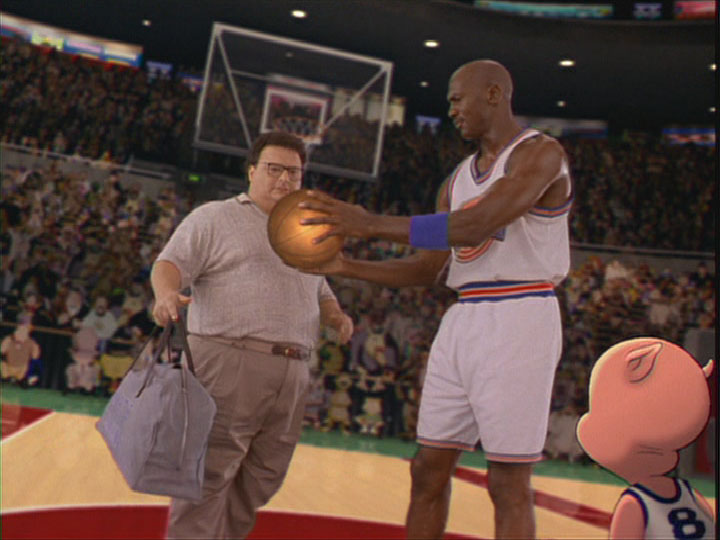 Maybe this is the problem?

I have heard that should UNC finish qualified for an NIT bid that the Heels should accept and get the younger guys more development time.  I couldn't disagree more.  If the season ended today, I would hope Carolina would decline the bid and start working on next year's team tomorrow.

So from here Carolina plays out the string with games against Miami and FSU at home and at Wake Forest and Duke.  Please, please, find a way to win two more games to finish above .500.  Sad to believe that this is what it has come to...